After Baidu, Facebook is also in the pit of fake ads

I'm the most wave in the tech world. 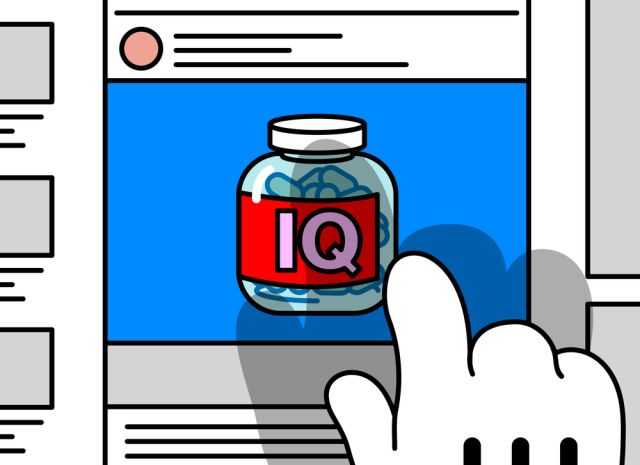 We have encountered a lot of unreliable advertising in our lives. Foreign countries, the problem of fake online advertising is just as serious, as Bloomberg has exposed fake advertising on Facebook platforms.

We have encountered a lot of unreliable advertising in our lives. For example, some time ago on the network was exposed, and then in the B station by the crowd Up the main ghost animal's "magic heart" - 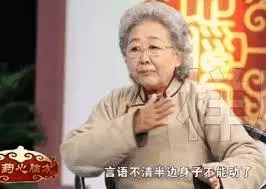 In addition, there is the "as long as 998" in TV commercials Above are relatively old unreliable ads. Now the fraudulent advertising on the network, it is more common, such as the common "Yutian Hospital", has caused Baidu "Wei Zexi" such a tragic event, but also let Baidu suffered the biggest ever crisis of public opinion.

Wei Zexi's parents hold the portrait in their arms

Bloomberg first came to an online advertiser slot in Berlin last June. This exchange is intended to be for communication marketing, but it is full of fake drug advertising scams common abroad:

There are people to promote the odd effect of weight loss drugs, rapid muscle-boosting drugs, "brain medicine" or strong yang medicine. There are also campaign operators like "You won an iPhone" and "Your computer is infected" and there are many so-called "alliance marketers" who approach these people to run advertising and exchange experiences.

Bloomberg reporters casually aska questions, many of the participants to remove the disguise, talk to reporters about how theyUse Facebook's platform to run fraudulent ads that ultimately trick users into buying counterfeit products 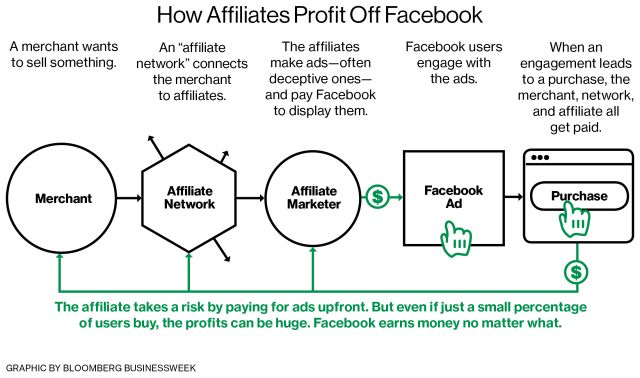 The basic process is not complex:Advertisers first contact the so-called "network affiliate", the network introduction alliance members (affiliate) and advertisers, and then the alliance marketer will design ads for advertisers, and pay Facebook to run these ads.

Advertisers, networking and affiliate marketers can all make money from Facebook users clicking on ads and completing their spending.

For example, if you want to sell counterfeit diet pills worth $100 a month, you can first contact NetNet as a middleman and determine that for every time you sell the drug, you will give NetBall a $60 commission.

Marketers pay Facebook for ads before they run them, but even if a small percentage of users buy products from them, advertisers, networking networks, and affiliate marketers make huge profits.

So what kind of ads do these people run? According to several marketers, one of the most effective types of advertising is the use of celebrities or news reports for false endorsements.

For example, it's true that skincare products claim to have a former American "first daughter" Chelsea Clinton. U.S. entertainment great Kim Kardashian has also spat, saying that ads have used her image to promote constipation without her permission.

Facebook also has a "brain-boosting drug" that claims to boost IQ, and even pulls Tesla CEO Elon Musk out of the "platform", saying Musk has taken it privately for years to support it.Musk also introduced the "brain-recovering drug" to the famous American news program "60 Minutes" and recommended that the American people take it and get a fair chance. 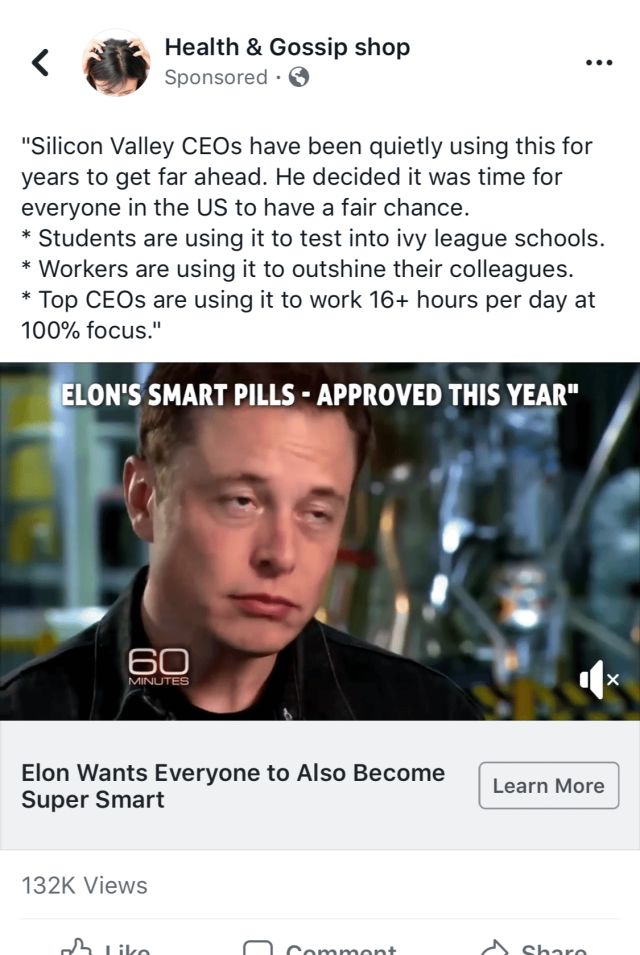 It's not that there are no celebrities coming out to defend their rights. Barbara Corcoran, a member of the us-based "Real Estate" and hit show "Creative Winners," said her image had been stolen from a Facebook skincare ad, with many saying she had been abused, even with her two sisters. "I sent a lot of letters to stop the abuse, " she says, "but it's too hard to find the source of the fake ads." "

In this case, marketers have made extensive use of a web marketing "sharp weapon" called Voluum to make fraudulent marketing more accurate in identifying potential victims. The developer of this "sharp weapon" is, of course, a central figure in Facebook's fake advertising marketing.

The central character is Robert Gryn, a Polish man currently living in California.

Gryn was also a marketer in his early years, starting out with a "free iPhone" campaign. According to Gryn, there would have been a prize at the event that year, but the participant had to pay about $1 a week, and in the end his income was much higher than the prize cost.

The marketing made Gryn profitable, so he began to focus on alliance marketing. By 2012, his income had exceeded $1 million, when he was 24. In 2013, Gryn bought a web development company called Codewise, which Voluum developed. 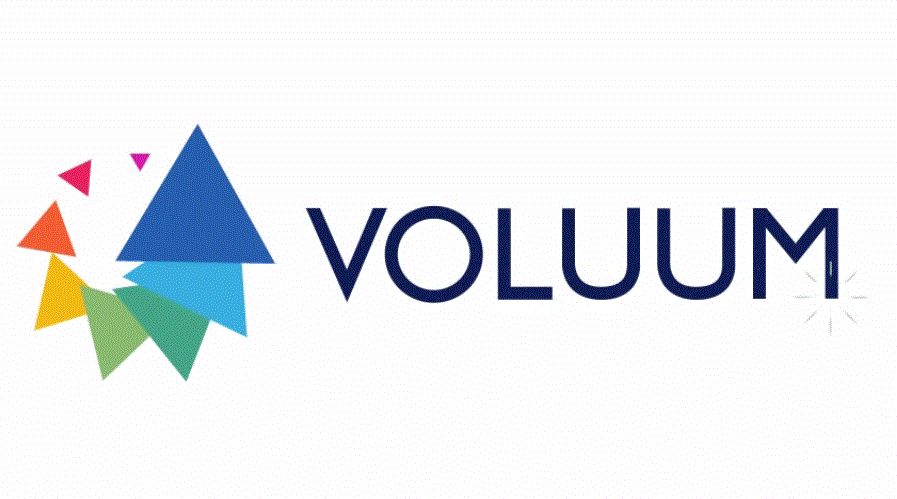 Voluum is a marketing tracking tool that can be used on platforms such as Facebook, Google and Twitter (though it was later blocked by Google), and Facebook marketing is a major application for the software.Tailor your ad content to different marketing targetsFor example, push ads for spanish speakers in their native language.

The most amazing thing is,The software can even identify the addresses of Facebook ad censors and then push them only for compliant ads.

Gryn estimates that users of The Voluum software can run more than $400 million worth of ads on Facebook each year, while running $1.3 billion worth of ads elsewhere. Codewise also had a strong revenue from the software, which generated $29 million in 2015.

As for the software being used for scams, Gryn argues that Voluum is only used to track data and accurate delivery, not to cheat.

There may be questions about the flood of fake ads, and why did Facebook not intervene?

This is a very complicated question.

First, we need to understand Facebook's advertising policy. Facebook rules,Marketers must pay first to run ads on their platforms.That is, Facebook is always on the flood and down, whether or not the ads are really effective.

It complicates Facebook's attitude to this fake ad: it wants to make money clean and sell hot.

Facebook's efforts to crack down on fake advertising have been in recent years. Until recently, Facebook had only a dozen employees reviewing ads in Austin, Usain, and Hyderabad, India, who were responsible for checking suspicious ads flagged by users or algorithms and blocking offending accounts.

But marketers always have a way to get around censorship, and if you use the software voluum mentioned earlier, it's better to circumvent it.

If it doesn't matter if a marketer account is blocked by Facebook, it's fine to reopen a new account. Some marketers can even buy "well-bred" accounts from outside, the so-called "breeding number" is to create an account that appears to have normal social relationships and activities, but does not actually correspond to any real-world users, such accounts need $1000 a. Other marketers may rent accounts from strangers or even seek solutions through underground advertising agencies.

"Facebook doesn't want these fake ads, it's obvious," said ben Dowling, a former employee. But the platform doesn't have a particularly good way to block them. "

Last year, Facebook announced that it had introduced artificial intelligence (AI) technology to identify fraud in ad delivery, which it said had reduced by two-thirds. Facebook has also added 1,000 celebrity players to its ads, and recently banned cryptocurrency ads.

It remains to be seen whether this is a solution to the problem. But several marketers say That Facebook sometimes blockes accounts, but more often helps them run fake ads.

One of Facebook's tools for marketers is a sophisticated and accurate ad delivery system.The system can track who clicked on an ad and bought a fake product, and then recommended the same ad to a similar group based on the algorithm.In the days leading up to the ad run, Facebook was still in the trial and error phase, the marketing chamber had a small loss, but such as the system touched the identified people, advertising revenue increased exponentially.

According to one marketer:Facebook took the initiative to help me find the fool to fool.”

Facebook's sales staff will also offer to help these marketers and encourage them to buy more ads.

Two former Facebook employees said some of their best customers had committed fraud, a common sense within the company, but the company's sales were instructed to make the scammers spend more on advertising space.Some sales, even dealing with the worst-behaved marketers, set sales targets of tens of millions of dollars per quarter.

You know, this is when Facebook is widely questioned about Russia's suspected interference in the U.S. election, and it's hard to believe that they're opening up their platform slotted up for fake advertising, but that's true.

Now Facebook because of user information leakage, facing the biggest crisis of public opinion since its inception, when bloomberg broke the negative news of fake ads, presumably small Zha must be in a mess.

Facebook ad and mail marketing tie up to make orders fly!
Can Facebook ads still explode? Actual case sharing
Is Facebook's ads really working so well?
Facebook: Advertising is our job, and it shouldn't be blocked by software...
How does Facebook's ad-scale pain break? Here's a free answer.