When we do FB ads, we often hesitate to use PPE or WC running method? Which is the best?

Why is advertising spending always unstable? How do ads start? How exactly do I make a daily budget and how do I allocate my amount?

Yes, there are a lot of questions, but when we're talking about them, we need to look at Facebook's advertising bidding strategy so that you're more directional when you do FB ads.

When it comes to the bidding strategy of Facebook ads, I've said anywhere that the ad strategy for the facbeook is not a 1-plus-two.

What do you mean?

It's no matter who you're out there listening to, about the strategy of facebook ads, or how cattle that person is, but what I'm telling you is that you can only listen to his play and use his mind.

No one can be sure to assure you, because you listened to his A method, and then used B's strategy will certainly measure the package explosion

There are too many uncontrollable elements in it.

You try to get a person out, can you guarantee the use of A-strategy plus B method s-explosion?

No one can guarantee it.

How do I gain experience with advertising?

I tell you, is to burn money, burn more money, naturally have experience, no money to burn, or not enough money to let you do the test, in order to accumulate experience, outside those advertising experience for you are all.

Well, back to the point, let's start with:

Because the advertising location on FB is limited, the most popular ads are News Feed, Audience Network, Mobile Apps, Messenger, and more.

So so many advertisers want to get advertising opportunities, through the auction ads, high bidmay may be successful.

So in addition to the auction price, Facebook has added other metrics to influence the display of ads:

First, say relevance score:HeHow relevant your ad and audience are, reflected in the number of clicks, likes, saves, and other engagements, the higher the relevance score, the lower the ad's spending.

Estimated rate of action:Refers to the display of ads to users, to achieve the desired user action is how likely. Facebook will show to the people most likely to do it, based on your ad optimization direction.

With a correlation score and an estimated action rate similar, the higher the bid, the more likely it is to gain favorable ad placements.

For advertisers, the object of the auction is click, conversion, etc. , you want how much the ad reached, will give the corresponding bid, then your ad spending will be determined by this auction.

However, bidding is not equal to the final cost. FB requires advertisers to win bids at the lowest price, meaning that advertising costs as little as a competitor's bid, and generally lower than the bid you started.

(This trick is Google's)

For another example, four advertisers are competing for advertising positions, but the FB has only three ad spaces available, and the FB will judge it based on the advertiser's bid. If A bids $5, B offers $7, C also offers $7 and D offers $10.

As shown in the following image: 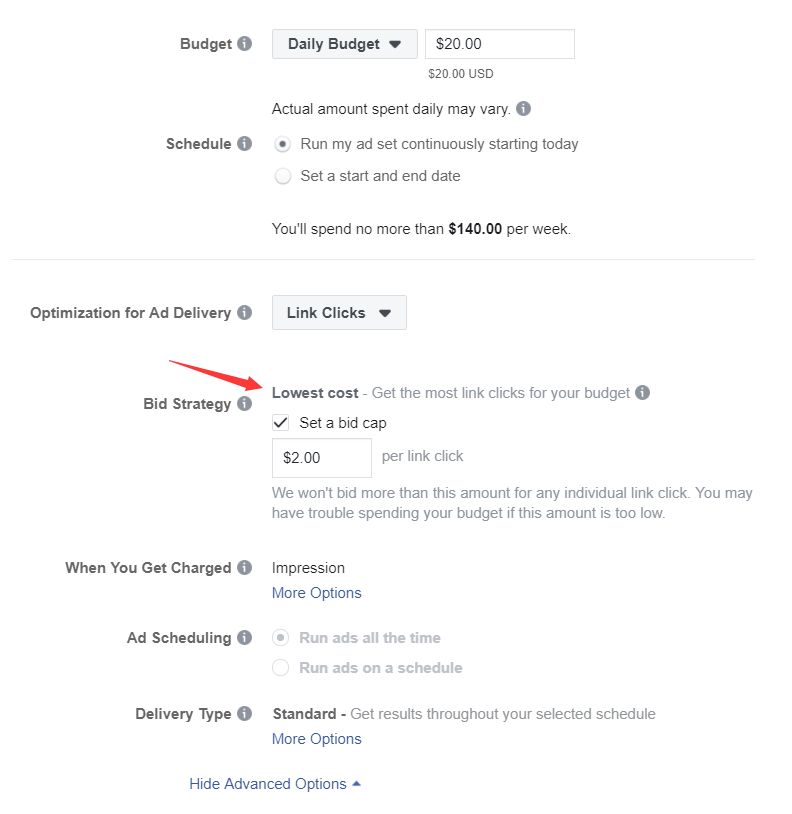 The lowest-cost bidding strategy keeps advertising spending low on the one hand, and on the other hand, it gives you more advertising positions. This strategy is great for less-budgete e-commerce, and you can also set a bid cap to keep your spending below a certain value.

Of course on this basis, in order to ensure that your budget is within control, you can set the upper limit of the bid

In any case, the bid set with a single click does not exceed the amount you set. Keep in mind that if this amount is too low, you may not be able to spend your budget adequately.

What are the different advertising goals?

FB provides ads with many different advertising goals, and you can set your own goals based on those goals.

Do you want to show your ads to a wider audience? How many clicks do you want? Do you have any special requirements for advertising goals?

2 Purchase intent, marketing the mid-layer of the funnel to increase engagement

Domestic advertisers commonly use advertising targets are two of them,App installs App installs And Conversions Conversions, the former is used for promotion and play, and the latter is used to promote e-commerce.

Once you've selected a different ad goals, you'll have different options for optimizing your ad delivery. 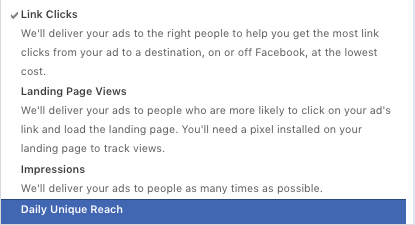 Which billing method should you use?

In fact, we should all note that facebook's advertising background often changes, the entire ad delivery method, advertising bidding strategy is changing

But the billing method, nothing more than based, CPC and Impression, and previously ocPM

CPC, that is, cost per click, a single click fee, that is, you only need to pay if an FB user clicks on your ad. So if your ad might have been shown a million times but didn't click, wouldn't you have to pay a penny?

If your ad doesn't have any clicks, FB doesn't make any money ah, will it do such a loss-making business?

No, it will stop showing your ads!

Such ads will be dropped by FB, and replaced with other high-click ads, even if their CPC is low.

The lowest cost bid strategy prioritizes the most results with the lowest CPC. However, the target cost bidding strategy does not significantly reduce CPC.

Charged for a thousand impressions, this is only for exposure, and Facebook will take your ads as much as possible.

In Internet ads such as Facebook, CPM depends on the "impression" scale, which is often understood as the number of times a person's eyes look at an ad for a fixed period of time.

For example, an advertising banner unit price is 1 yuan / CPM, which means that every thousand people see this Banner words will be charged 1 yuan, such as such push, 10,000 people visit the home page is 10 yuan.

I myown general CPC or OCPM to do more fees

I think doing activities, doing branding, Impression is a good way to bill.

As for how to determine the pricing strategy that is right for your FB ads?

You can start with a high bid to help you get an advantage quickly, let your account run first, accumulate data for later marketing, and then slowly lower to find the way best for you.

Because I have seen a lot of people, the early ads are too well controlled, too dead, resulting in advertising data sometimes can not run out....

This article is Facebook's Ad Auction Strategy (1), and there is clearly a second part

Above, the above is 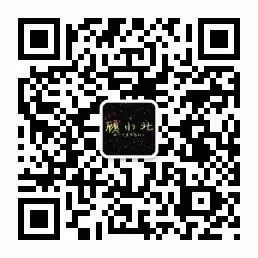