More and more foreign trade enterprises are beginning to pay attention to their influence on Facebook, hoping to directly affect the user's buying behavior on the side. Companies are looking for people who are proficient in Facebook operations, whether it's running on behalf of operations, internal employees, or recruiting new people, and Facebook's ability to operate is an important bonus. Today the ring newly organized a comprehensive systemFacebook Ad Serving Tutorials, I hope it will help people who learn or want to learn more about Facebook ads.

Take an agricultural machinery company in Jinan as an example:

The company's main target market is in Africa, hoping to create a professional Facebook page on Facebook and achieve 100,000 fans in the industry within a year, with 600 inquiries.

Such specific goal settings can help us better choose campaign types. There are some more common targets, as follows:

Attention! When setting key goals, be specific, otherwise it is difficult to achieve the desired results.

For Facebook corporate accounts, you can apply for them yourself or set up an ad account through an agent. Here, it can only be said that the agency's advertising account, in addition to being able to secure points, other and personal no difference. (Agents generally guarantee that the number will not be sealed.) As long as your account doesn't violate Facebook policy, it's generally not a problem. )

Open Facebook, click on the back-and-down menu in the upper right corner and we'll see our established homepage and ad business management platform. (Take a little bit of your ads before you take a look at the features of the entire platform.) )

Once the basic ad account is set up, we can go to the Ad Management Center to run ads. The Facebook Ads system is similar to Google Ads's advertising system, with a 3-stage campaign - ad group - ads。Campaign stod-in goals。First, we open the campaign hierarchy, where we can have two patterns for creating ads and quickly creating them. 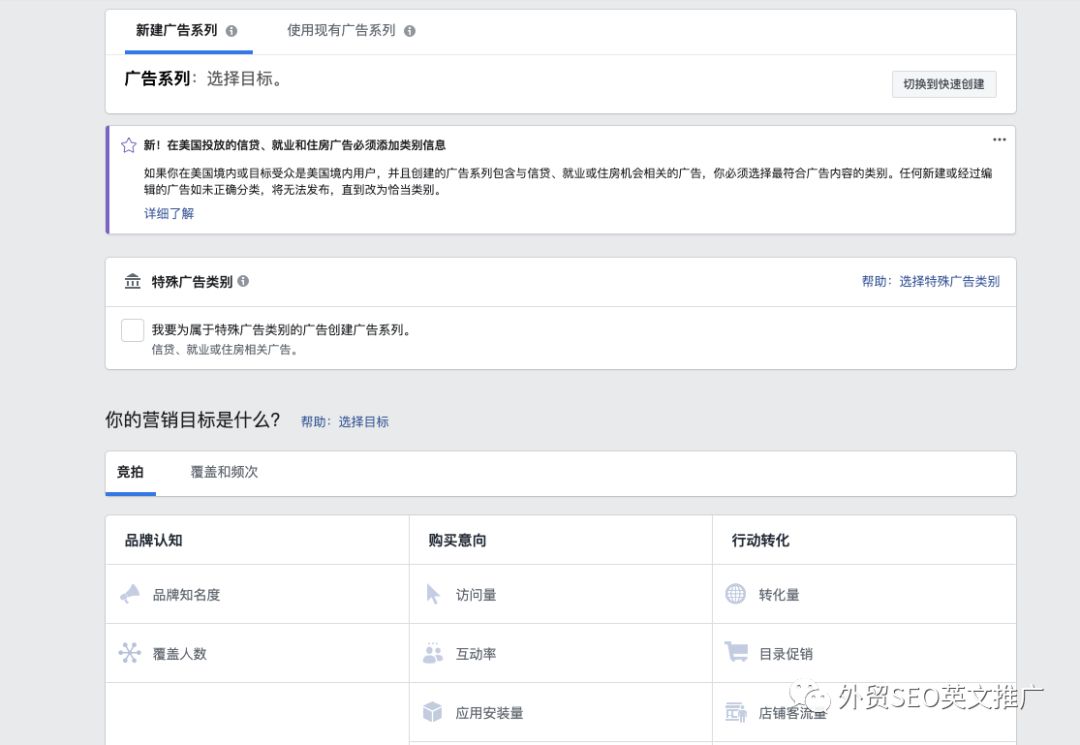 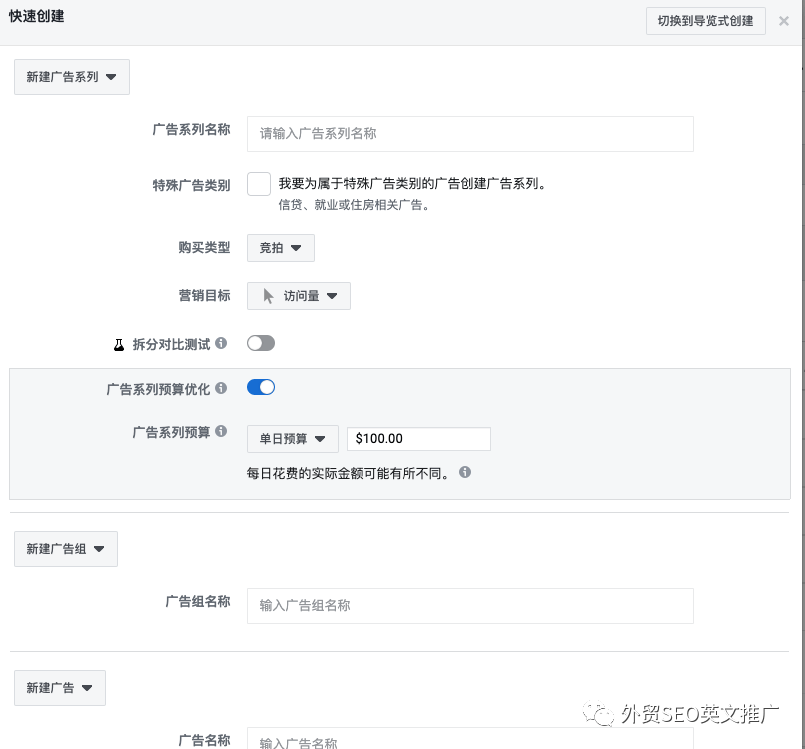 The guided tour is good for novices to create ads, because every detail is clear. Quickly create an optimizer for a better understanding of Facebook's advertising system. So it's first recommended to create with a guided tour.

In the guided section we can see a lot of advertising targets, where we need to based on the marketing objectives set in Part 1 to choose the form of advertising. 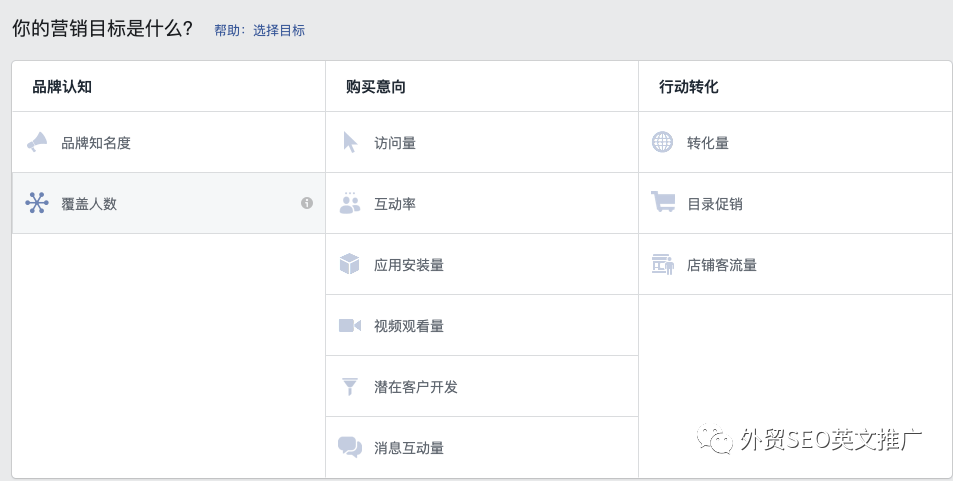 Mainly for people to be interested in your brand and products, do not seek conversion, as long as can let others see the impression can be. There are two main goals:

The main goal is to get people to think about your product or service and get more information about it. This section has six main advertising goals:

Encourage target people to buy or use your products and services.

As far as the agricultural machinery companies mentioned in this article are to achieve their goals, the focus is on the campaign to choose: the interaction rate increases the home page fans, potential customers development brings inquiries. Of course, you can also aid the use of traffic and message interaction to increase inquiries.

Only one ad target can be selected at a time, and then named for that goal to distinguish it from other campaigns. If you want to test a D/B on ideas, layouts, optimization strategies, and so on, open the button and select the object you want to test. 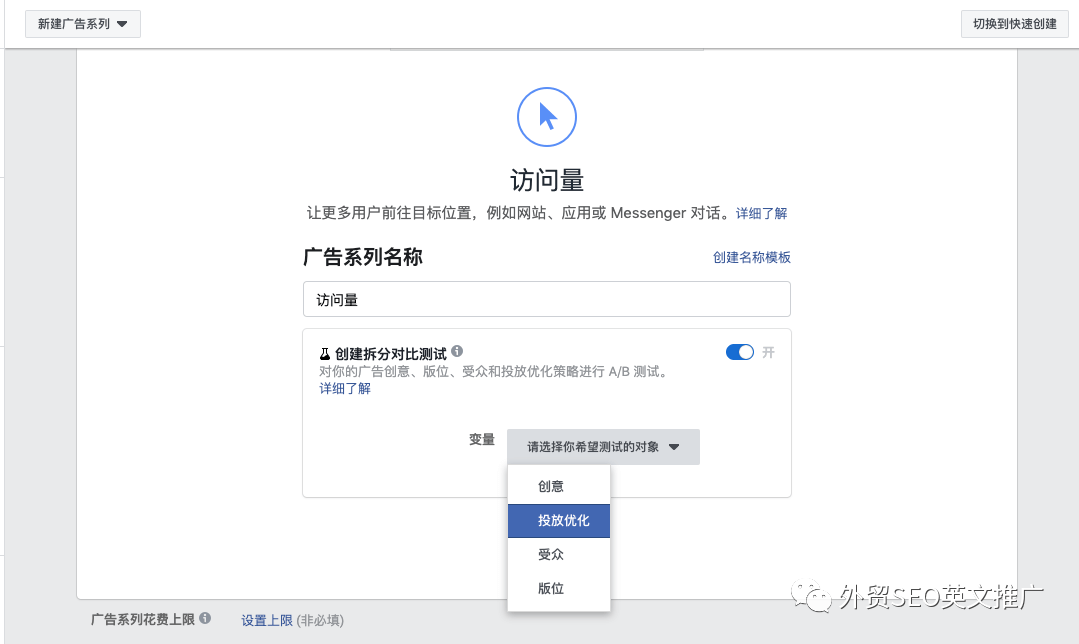 There will be 2 contrast ing-ad groups in the campaigns that you tested, and all but the variables you want to test will remain the same. This feature is not recommended for novices. Try it when you're familiar with your ad account and move further. We can set budgets and spending caps at the campaign level, or we can set them at the ad group level. Campaign settings, according to the performance of different ad groups, flexible allocation of spending. Each ad group's budget is fixed when it sets a budget.

Once we've selected your campaign, we can move on to creating an ad group.Ad groups focus on audiences, placements, and budgets，Of course, if you've set a budget for your campaign, you don't have to think about it at the ad group level.

We take the lead development goal as an example, to carry out detailed operation (advertising creation process, much the same, the process is basically the same):

Go to the ad group level and name our new ad group. The naming of the ad group here will not affect the effectiveness of the ad, but it is recommended that you use easy-to-understand English to facilitate subsequent data tracking and statistics.

Then we choose the home page that needs to be promoted.

If you want to use dynamic footage, click the button on the dynamic footage. Using live footage means that Facebook automatically combines the different ad materials you upload to find the best combination of ads.

Below we came to the focus section, the audience's settings. Audience is one of the most important factors in the success of Facebook ads, and only by choosing a precise audience can our ads achieve good results. In this place we can choose to create a new audience or choose from an existing audience. The new audience here we call the core audience you can also think of as the base audience. The core audience is primarily targeted by demographicdata provided by Facebook.

Facebook suggests targeted audience expansion in order to achieve good advertising results, and we chose the following demographics, taking an agricultural machinery as an example: 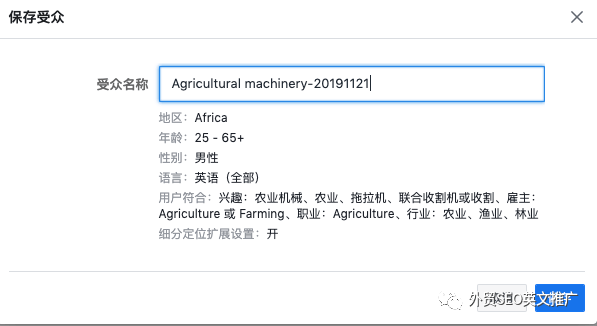 In addition to the core audiences you're just starting to reach, Facebook ads have two other ways to target your audience: custom and similar audiences

Custom Audiences allows advertisers to create custom audiences and serve ads to them using customer lists, Facebook engagement, site visits, or app visits as a source of information. There's no doubt that with ads served by a custom audience, conversions will be better than those of your core audience. The reason is that Custom Audiences are already associated with our Facebook page, site, or app, and Facebook has captured the information with pixels, so it's less difficult to deliver and highly converted. 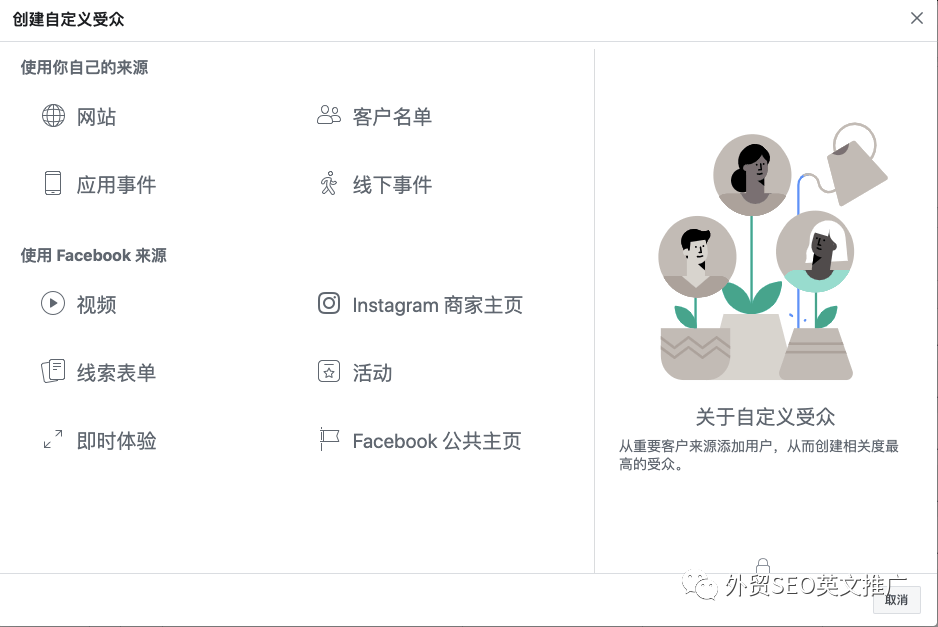 Similar to the audience, we can also understand as expanding the audience, that is, upload ingress with existing resources, so that the Facebook system finds people with the same characteristics. The similarity is from 1%-10%, and the lower the value, the higher the similarity. 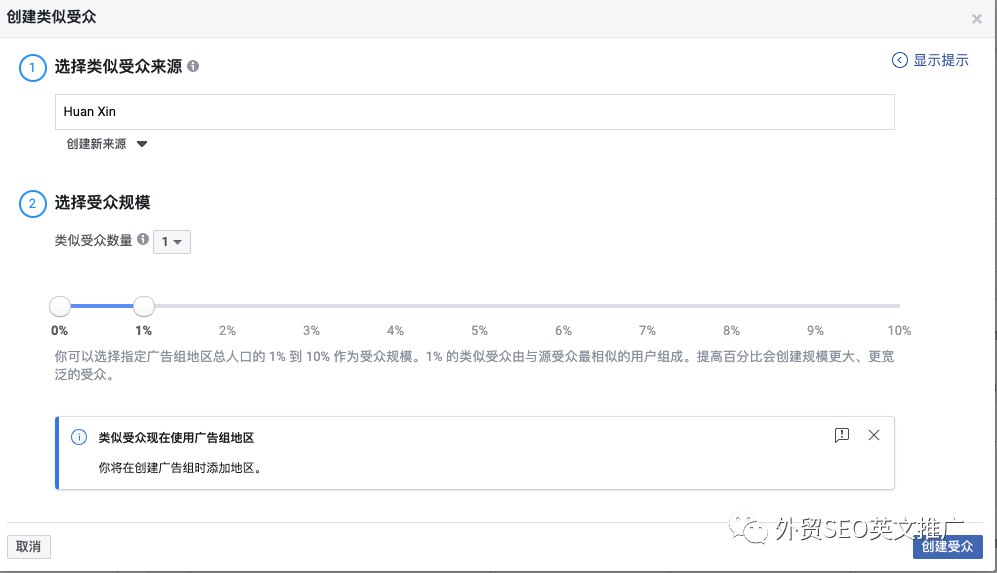 A seed user similar to an audience, either a home page or a custom audience. However, when you need to be aware of similar audiences, be aware of the overlap between different audience groups. Don't repeat the ad to the same person multiple times, which can cause the audience's disgust.

The so-called placement, which is the placement of the advertisement. Facebook recommends using the default ad placement to get the best impression at the lowest cost, and you can also choose the following ad bits for your needs: 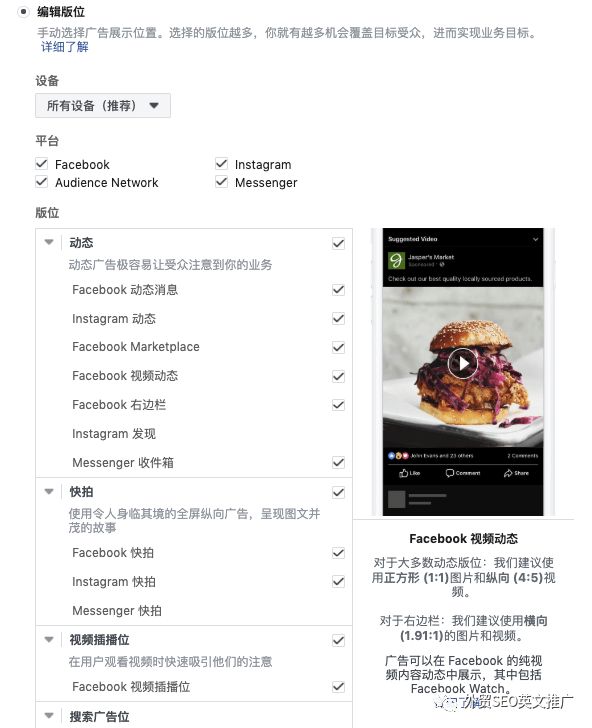 If you set a budget for your campaign, you won't be used to select at the ad group level. Just choose the drop time directly. If you want to set up a budget amount here, be sure to note that the amount you enter is the maximum amount you will spend, don't get it wrong. In addition, you can set a daily budget Or set the total budget for ad delivery 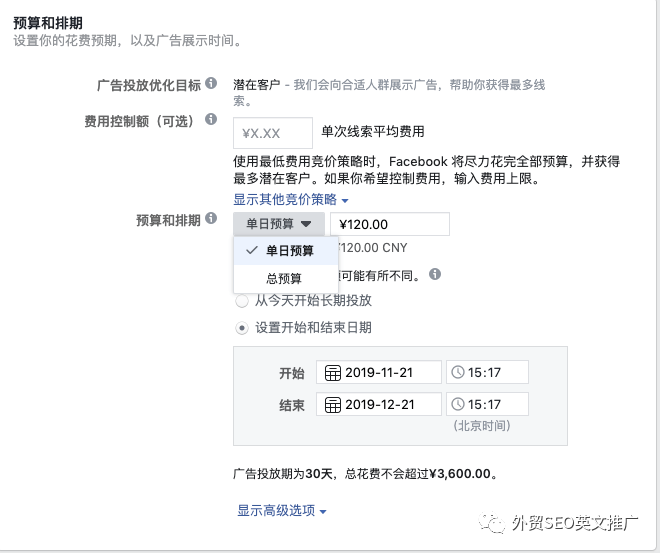 Once budgeting and scheduling have been set, we can see the general results of your ads. Can be used as a reference. 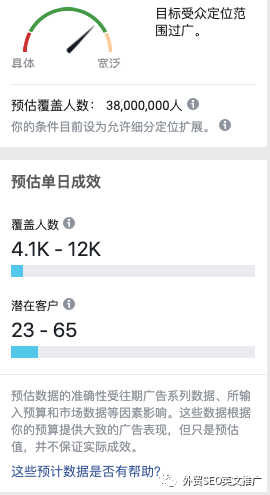 Once the ad group level is set, it's the next level - ad。The focus of the ad hierarchy is on setting content ideas。Facebook ads are display ads, which require advertisers to create the most exciting ideas and catch the eye of customers in the shortest possible time. 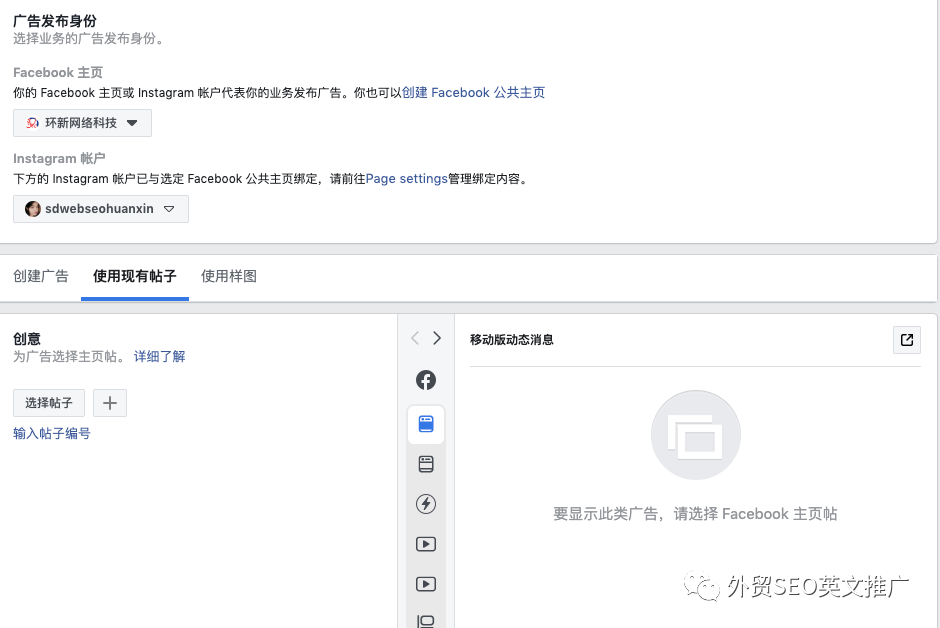 Tips:Compare the effectiveness of an existing post when using it. Pick the best-performing posts to run and get the best ad results.

Once selected, we can use the display bar on the right to watch Facebook ads perform on different placements. 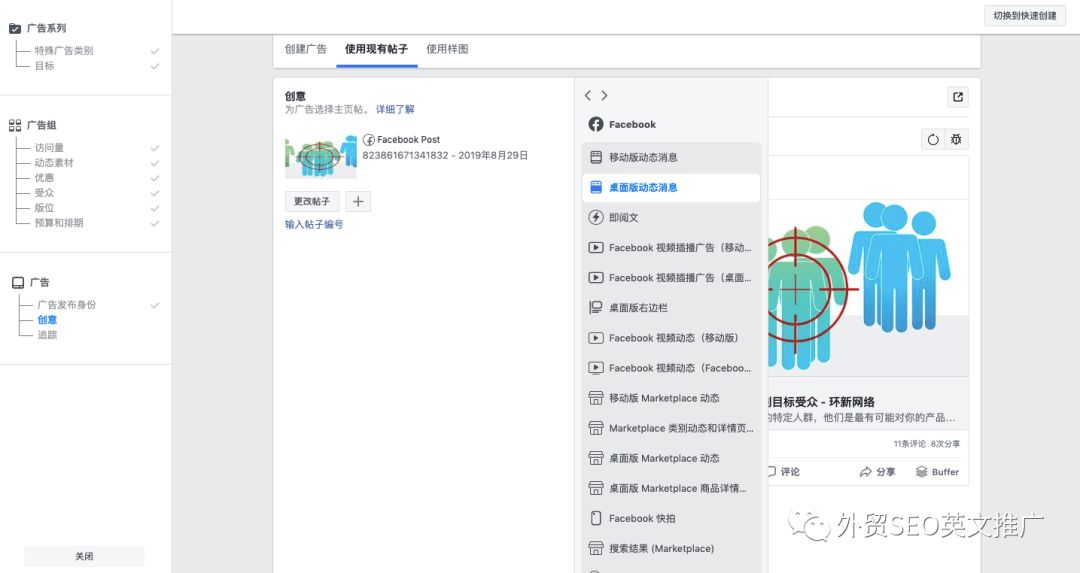 Attention:Not all campaigns are equipped with these six forms of advertising. It depends on the campaign you choose.

Once we've selected your ad form, we'll add the title, description, and multimedia files of the ad. Facebook has strict requirements for all three.

After writing the advertising idea, you can also look at the effect sat in each version. Then choose the appropriate call to action, open pixel tracking can be advertised for review and delivery.

Attention:Once the Facebook ad is built, it's not recommended that people change it. Facebook has a 24-hour review period, typically one week or the first 50 sessions. Once an ad is modified for review, it takes a long period of time to review and affects the effectiveness of your ad. Therefore, We suggest that if you want to modify it, stop the original advertisement. Paste copy create sfrom new ads to run.

Today's Facebook ad delivery tutorial is here, if you have any questions or questions about ad serving, welcome to leave a message below

If you want to learn more about foreign trade SEO, you can find us in the following ways: 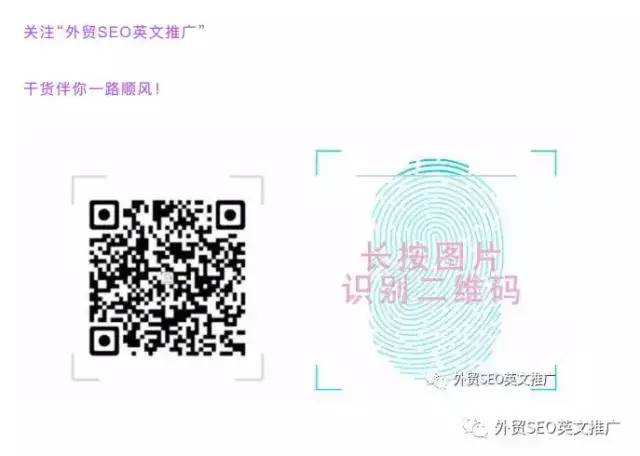 Take stock of common BUG collections and solutions for Facebook ad accounts in June
Facebook ad and mail marketing tie up to make orders fly!
Can Facebook ads still explode? Actual case sharing
Is Facebook's ads really working so well?
Facebook: Advertising is our job, and it shouldn't be blocked by software...