Facebook campaign budget optimization: Will it work? A $1000 experiment

This article is translated from the experimental section of adespresso.com, based on Google Translation corrections, and some professional vocabulary is retained in English. The original text was posted on July 29, 2019 and requires a paid account login to view. Connection:

The following is the body:

If you've been following news of Your Facebook ads lately, you've probably heard a lot about Campaign Budget Optimization (CBO). That's because the CBO has made a fundamental change in the way Facebook allocates its budget in its campaigns. For some accounts, it will be the only option after the Sept.

So far, budget control at the adset tier allows advertisers to precisely control the budget each audience receives. With CBO, because the budget is set at the campaign level, the user has less control and it's up to Facebook to decide how much budget each adset is allocated.

This is the structure of Facebook's campaign, and the CBO has raised its budget from adset (blue box) to campaign level (green box). 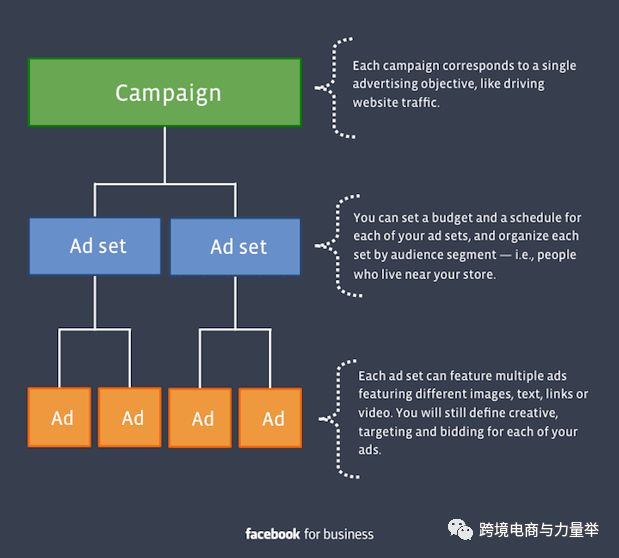 For a complete explanation of how the CBO works, check out our in-depth guide here.

Since the CBO budget allocation is in the black box and mandatory for many people from September, many questions have been asked to advertisers, including:

Will each adset still receive a large portion of the budget, or will all budgets be allocated to the best performing adset?

Will Facebook test each adset fairly with enough budget before choosing the winning adset?

There's only one way to find out, and that's to put some actual advertising into our latest $1000 experiment.

The key to campaign settings is audience spending to understand how CBO handles audiences of different sizes based on different CPAs. That's why we created a 1% LAL audience for the U.S., UK and New Zealand based on previous webinar registered users.

The size of the LAL audience depends on the total adult population of the country with a Facebook account, so the size of the 1% range of LAL groups varies widely from country to country:

Here's the ad we use: 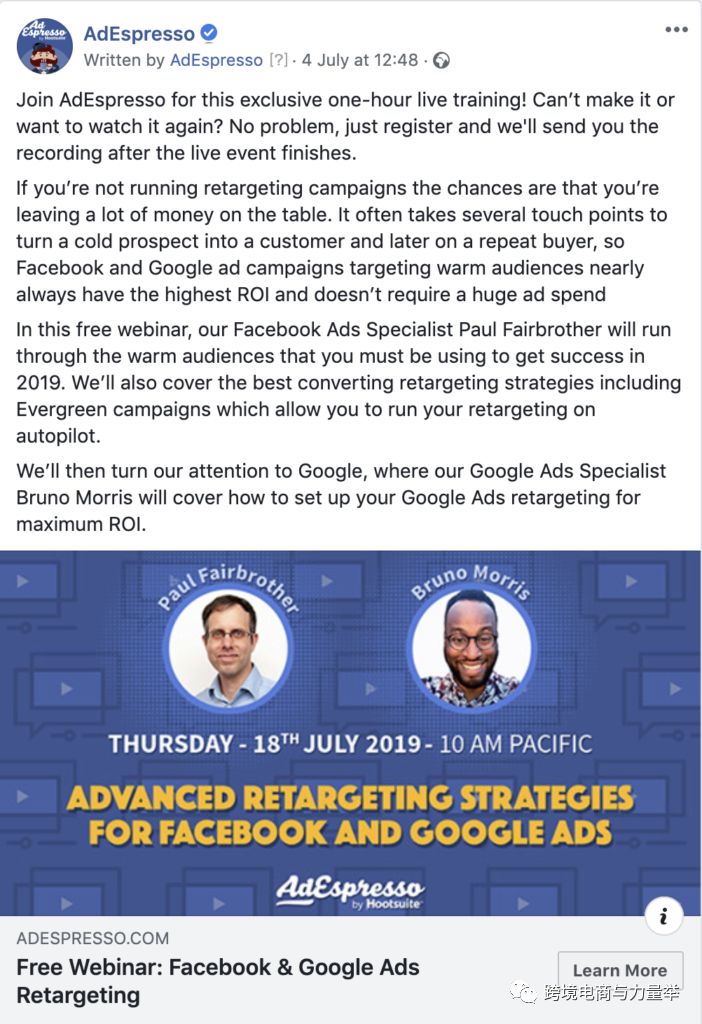 This takes people to the landing page, where we trigger the Complete Registration pixel event after the form is submitted. 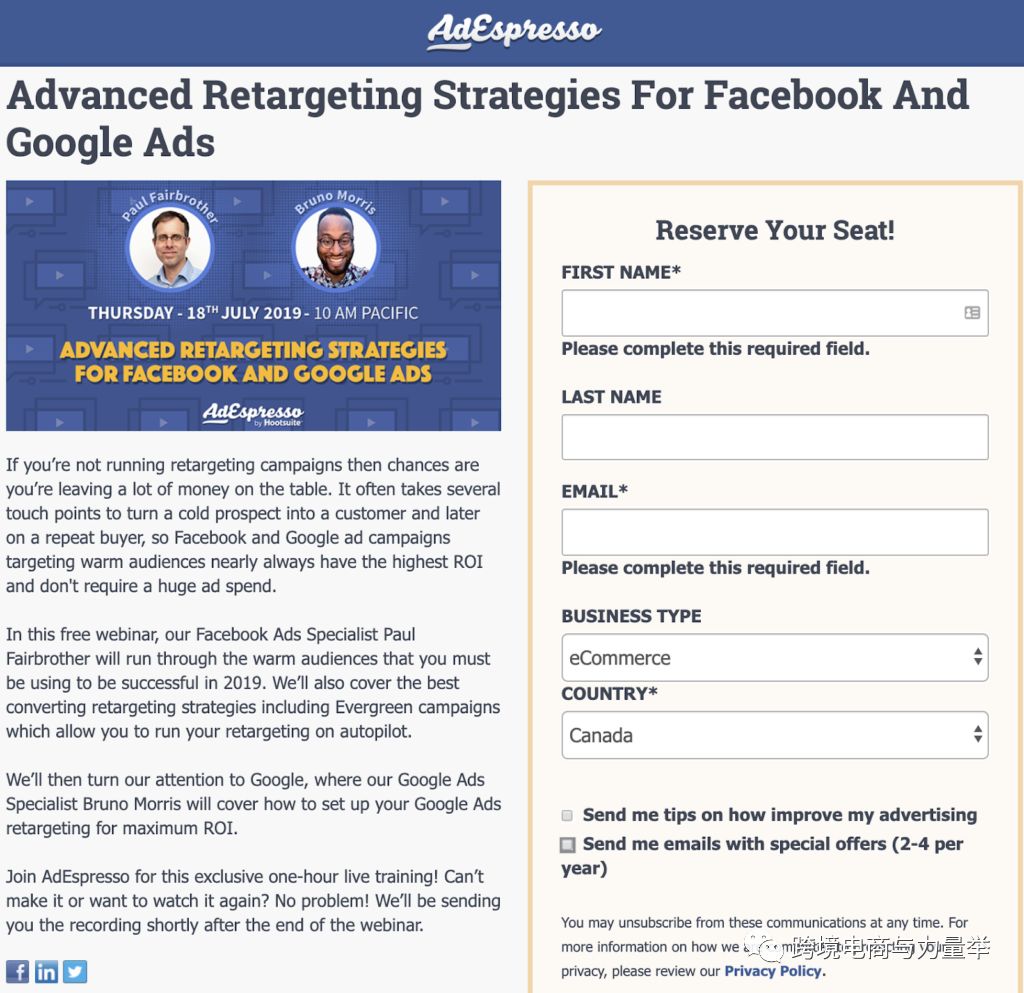 The rest of your campaign is set to:

Campaigns are optimized for conversions and billed based on impressions

We expect budget allocations to be volatile in the first few days until there is enough data to pick out the winning audience.

Therefore, our hypothesis is:

Budget spending a lot of time in the last few days

Once there is enough conversion, the winning adset will receive the vast majority of the budget and the daily budget allocation will be stable

Our forecast also depends on which audience has the lowest CPA.

We expect the UK to have the lowest CPA because advertising is high in the US and UK audiences have similar conversion rates, but CPM (the cost per thousand impressions) is much lower.

The CPA is expected to be higher for New Zealand audiences, as Smaller audiences (less than 1 million) are generally higher than broader audiences.

Our hypothesis means we want to monitor three things:

Track daily budget allocations and see if they are stable or substantially adjusted daily.

Does the CPA's lowest audience get the bulk of the budget?

Do you have enough budget to test all audiences before selecting the winner?

Results of the experiment

Overall, the ad was a success, with 494 registrations and the CPA just over $2. 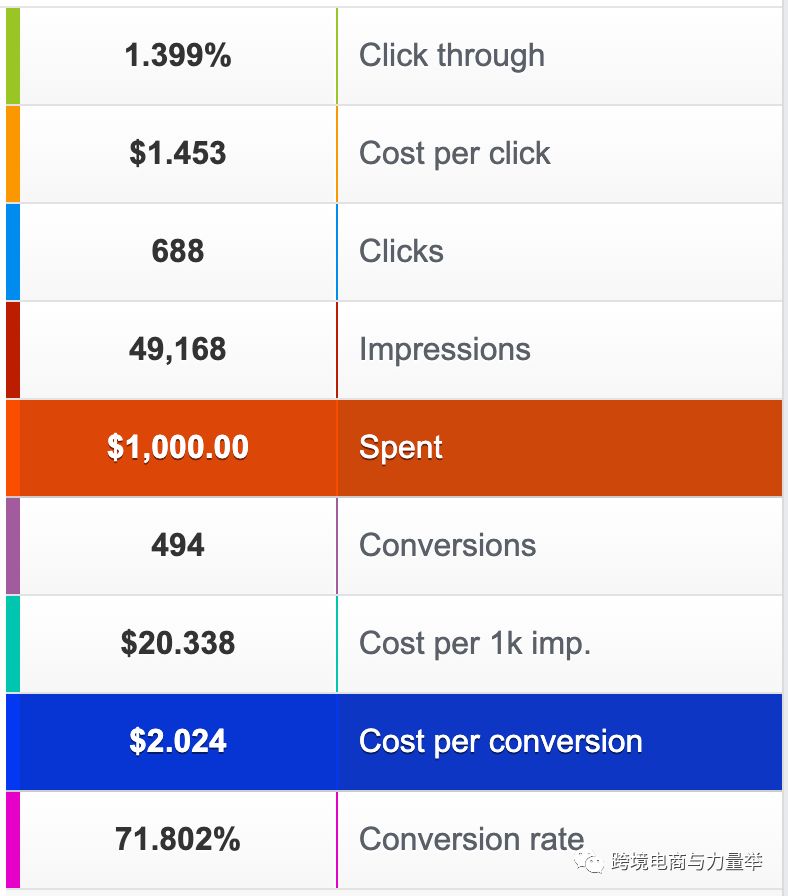 Next, let's dive into the adset hierarchy.

We can see that the United States is the lowest CPA and CPC, CTR the highest performing countries.

The UK is in the middle and New Zealand has the highest CPA.

In keeping with this, Facebook did allocate most of its budget to the US, with the UK receiving the second largest share and New Zealand receiving the smallest share. 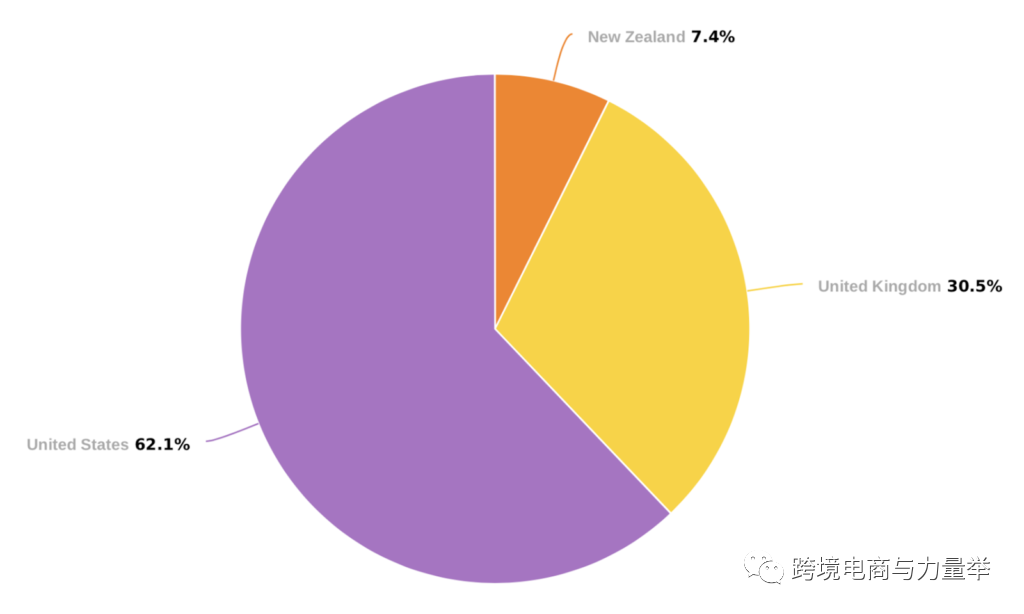 We can see that there are no big fluctuations every day. Instead, Facebook first provides it with a reasonable budget based on the size of its audience.

Obviously, the CPA is the lowest in the United States, and Facebook has correctly optimized its campaigns by shifting more budgets to the United States rather than the UNITED Kingdom and New Zealand: 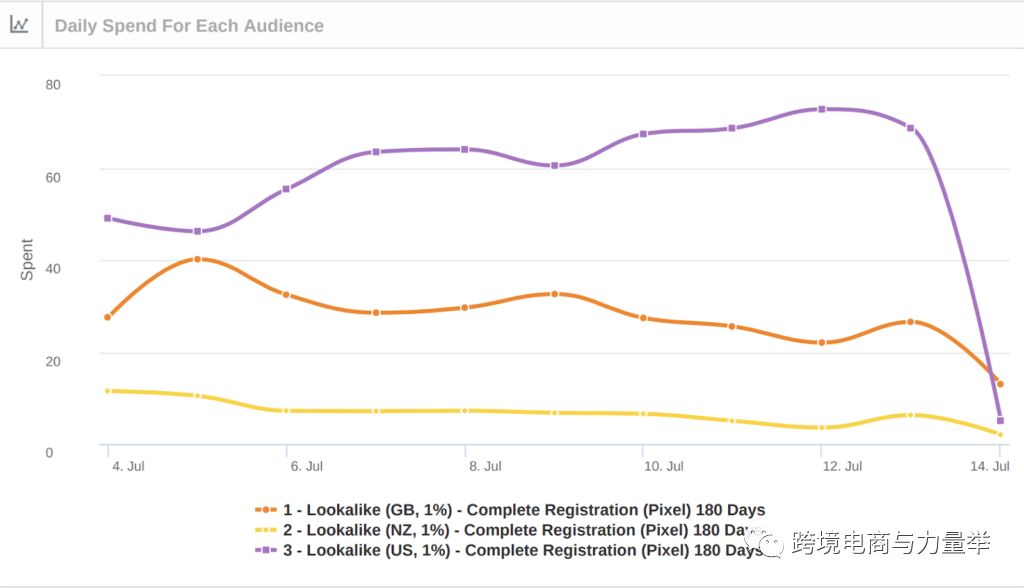 Looking at the daily CPA, we can see that New Zealand and the UK had the best results on the first day.

Since then, the CPA (purple line) in the United States has remained stable, with fairly stable results.

New Zealand's daily variation is much higher, presumably because of the smaller daily budget. 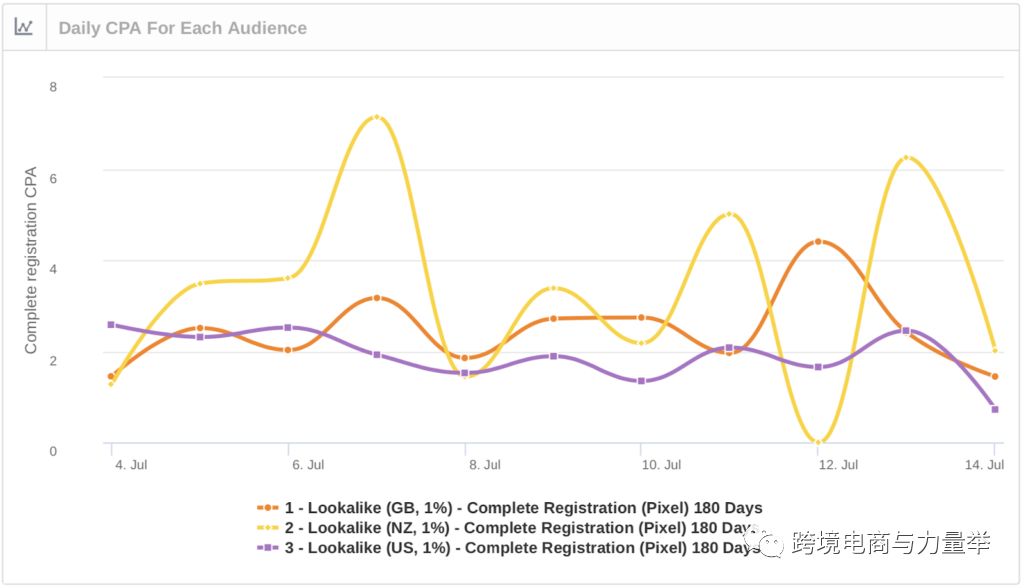 The conclusion of the experiment

The table below shows that Facebook is not only allocating budgets based on audience size, it has also allocated additional funds to New Zealand and the UK. However, this is not simply an even allocation of budgets between each audience.

The lowest budget for the lowest country in the CPA

For the Lowest CPA in the United States, the CBO has effectively increased its budget.

Overall, the CBO has done a good job of allocating budgets.

It allocates enough budget for each audience to be properly tested, and there is no big fluctuation in the daily budget.

For novices or advertisers who want to reduce the hassle, the CBO allocates the budget better than the average allocation (too much to the more expensive countries) or proportionally (the allocated budget is not sufficient for testing).

Can advanced users manually adjust their budgets for better results?

Maybe, but we also need to pay attention to the breakdown effect.

We have to consider how the CPA will change if all budgets are allocated to the cheapest audience.

Although the CPA in the U.S. is $1.88, there may be only so many cheap conversions. Additional registration costs in the U.S. may be much more expensive than getting affordable results from other countries.

The transition to the CBO has been a concern, so this is the key point for us to take full advantage of the CBO:

So if you're just starting out with Facebook ads, or don't want to micro-operate your campaign, it makes sense to use CBO.

However, it is still useful because the breakdown effect is taken into account.

Setting a minimum and maximum budget for each adset prevents extreme changes in budget allocation sand and ensures that all adsets receive a certain budget.

This is especially useful during the initial testing phase.

Facebook recommends not using budget caps for each adset, so consider using this option only if the budget allocation is very uneven.

If you haven't started testing CBO yet, start testing now, as some accounts will be enforced in September.

Start by applying to a few campaigns to see how it works, and then start inge from there.

What did you get with CBO?Do you prefer to allocate your budget manually?How many campaigns do you use CBO?Let us know what you think in the comments below.

Facebook campaign budget optimization: Will it work? A $1000 experiment
Up to 200 words, currenttotalWord