How can I use Facebook campaigns to optimize your budget to improve your ad performance?

In this article, I'll analyze how Facebook's campaign optimization budget is improving your ads from the following points:

Using campaign optimization budgets, advertisers can set an overall budget for campaigns, and then FB's internal algorithms allocate more budget to the best performing ad groups based on the performance of each ad group to achieve optimal marketing results.

In fact, the FB launched the CBO as early as 2017, but why now give you an emphasis on this strategy?

Because FB notified cBO in September this year will become a default algorithm for FB advertising, can not be canceled. During the transition period before September, advertisers can still control campaign spending by setting ad group budgets, or change themselves to CBO to accommodate. After September, all advertisers notified will cast.

In the Facebook Ad Help Center, Facebook explains that budget optimization is moving to the campaign level, as the link address: 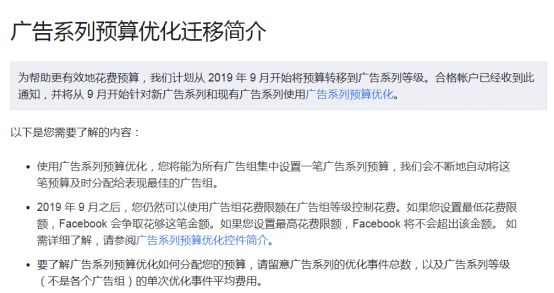 Okay, so what does that mean?

I came to the popular explanation,

Imagine this feature has not come out before, in a campaign below there are two ad groups, one audience is a similar audience, one is interest audience, how do you judge which audience is better, I provide a clue, The number of similar audiences reached (of course you need to go into the ad group level to get specific reach) is 2 million, and the number of interested audiences is 500,000.

If you allocate a 1:1 budget to these two ad groups during the test phase, it's unfair to a similar audience of 2 million, because the ad for that audience is much less likely to reach than the interested audience. So it's appropriate to allocate the budget equally proportionally by the number of audiences, based on which the ad group's budget ratio should be 4:1

You see that without such a method, is it better than you've set up ads in your ad group separately?

The first is the most basic definition.

Campaigns:All efforts to achieve an ad goal, including all activities to achieve your advertising goals. If you want to achieve 2 ad goals, then you set up 2 campaigns.

Ad group:Ad groups are subcategories of campaigns, with multiple ad groups under one campaign and multiple ads in one. Each ad group has a unique budget, auction, timing, ad placement, audience.

FB previously could set budgets at the ad group level, while CBO was allocating budgets at the campaign level, and each ad group's budget was optimized by the FB's internal algorithm.

Advertising:Advertising is the smallest unit of the campaign, is directly displayed to the audience of the creative material, the main form of copy, WEB address, pictures, video. 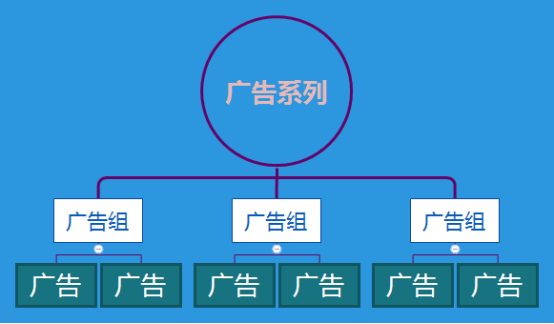 The settings for your campaign are shown in the following image: 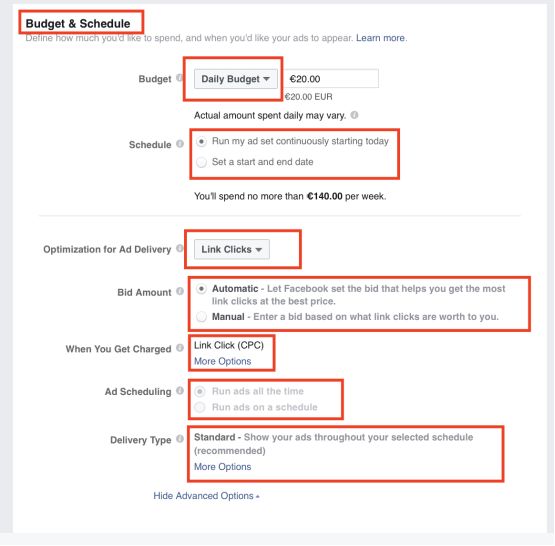 The first step is to allocate a budget for your campaign

The daily budget tells FB campaigns that the annual budget, based on this level, generates advertising spending, but when FB discovers high potential opportunities, it may spend 25% more on the daily budget (low potential daily spending decreases).

So when set to a daily budget, daily ad spending is not fixed, but there will be an average.

The total budget is the total campaign budget that FB can spend throughout the campaign period, the FB will have an allocation, and then the average daily ad spend will be calculated based on the date, withno more than the total budget amount for the entire duration.

Recommendations can be set to a daily budget plus unlimited duration, so that you can modify your daily budget later, and you can pause your ads at any time.

The second step is the optimization of ad serving

Ad delivery optimization is set according to your ad goals.

The third step is bidding.

I've talked about strategies for facebook ad bidding before, and I'm not doing a specific analysis today.

Facebook ad bidding is divided into automatic bidding and manual bidding, not skilled you can set up automatic bidding first, facebook will give you a suggested bid range, and automatically enter the proposed bid in the box.

The fourth step is the timing of the ad serving

You can set a custom ad serving schedule so that your ad will automatically arrive at the time you choose. For example, you can choose to arrive the next day.

It is recommended that you select Run ads all the time for the first campaign. This gives you a report that shows which date and time ads work best, and then you can set up a custom delivery plan based on the report.

The fifth step is the type of ad serving

Choosing the delivery type is the last step in your campaign settings.There are two types of standard ad serving and accelerated ad serving.

Standard ad delivery is delivered at the lowest cost, the best speed.Accelerating ad delivery will run your ads as quickly as possible, at a higher cost. The recommendation is set to standard delivery, accelerated delivery is more suitable for large enterprises with high time requirements for delivery. 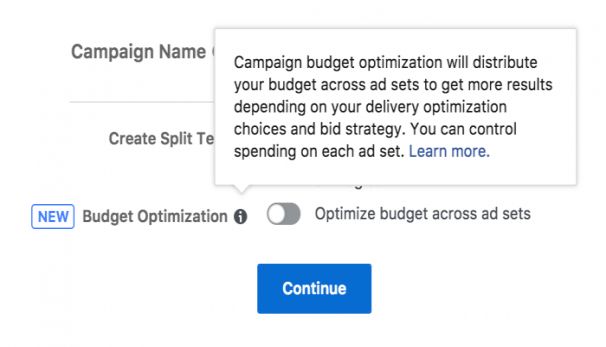 Once you've selected budget optimization, you can set up a campaign budget, daily budget, or total budget. Daily is setting the campaign's daily budget, and advertising spending fluctuates around this level.

Lifetime is the overall cost of a campaign operation, and the final ad spend does not exceed the total budget. 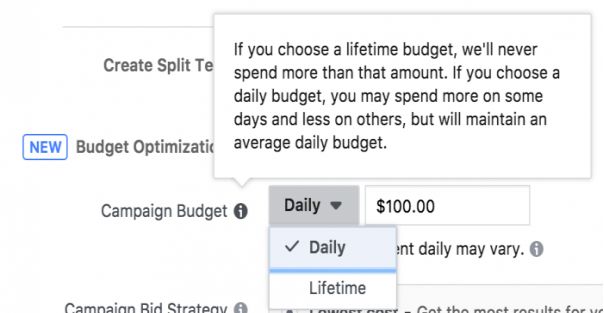 From this example, you can see how the CBO works. On the left, there is no CBO, and the campaign's daily budget is set to $30, because the campaign has three ad groups, split equally for $10 per ad group, and the final campaign gets 10 conversions. 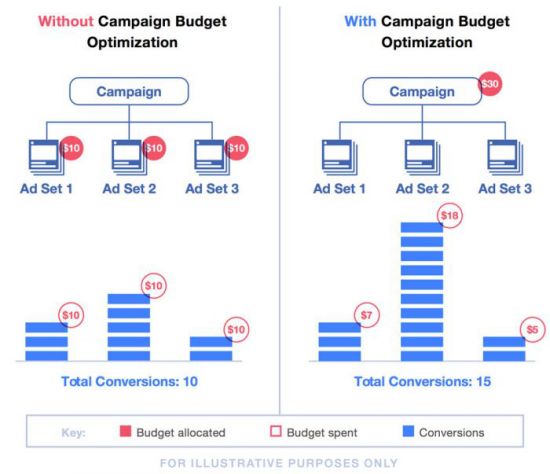 On the right is cBO, because the second ad group is doing better, so the FB tilts its daily budget to it, while the remaining two ad groups have daily budgets of only $7 and $5. The campaign, which adopted a budget optimization, ended up getting 15 conversions.

So, with campaign budget optimization, you'll start by setting a budget for your campaign, and FB will allocate that budget based on the performance of each ad group to achieve the best results.

If you want to control the FB's budget allocation, you can set a limit (ad set spend limits) for each ad group in the budget and schedule section to set a maximum budget or the smallest size.

Your campaign should contain multiple ad groups, and in the case of a single ad group, the CBO makes no sense.

In addition, campaigns that use budget optimization cannot be run on a regular basis, nor can they use accelerated delivery.

So what are the advantages of CBO budget optimization in Facebook ads?

2. By giving the best-performing ad groups more budgets, the CBO can get more results, reduce the cost of each result, and maximize the total value of the campaign.

3. The CBO does not need to track and reallocate budgets in the optimization process, simplifying the management of campaigns.

4. Reduce the situation in which the budget is not spent. Remove audience overlap, and if one ad group overlaps with another ad group's audience, you can still spend your budget on another ad group.

5. Compared to manualbudgeting, the CBO budget optimization process does not trigger machine learning and does not restart the FB learning process.

6. CBO audiences spend more efficiently on advertising, helping to find the lowest cost opportunities across all ad groups and targeting.

To take full advantage of the CBO strategy, here are three things to note:

Each ad group needs at least 50 conversions to run steadily. You can see the best results of the CBO by ensuring machine learning for a minimum of 4-7 days before the ad extension.

2. Split your campaign based on channel phase

Campaign budget optimization would be better if you split your campaign into Top Of Funnel (TOFU), Middle Of Funnel (MOFU), and Bottom Of Funnel (BOFU).

For example, we'll give a smaller but good-quality hot audience a relatively high budget, and a cold audience of poor quality will allocate a lower budget.

3. Set the maximum and minimum amounts for the ad group budget

CBO is sometimes extreme when budgeting, especially new campaigns that don't have a lot of data. By setting the maximum and minimum amounts for your ad group budget, you can effectively avoid this problem and ensure that every ad group has the opportunity.

This strategy doesn't require a lot of data, and you don't need to set up some similar audiences in advance. Just set up a separate campaign to test a single interest audience.

I usually target a broad audience: all countries covered by E Post, in English, with an audience of about 10 million. And use a separate campaign to test these interest audiences.

A few days later, from this campaign, identify 5-10 well-performing ad groups and copy them into a new CBO campaign.

Observe the performance of each ad group, stop the bad-performing ad group the next day or the third day, and narrow the new CBO campaign down to five ad groups.

A few days later, if there is an ad group in this CBO campaign that is not profitable, stop the ad group and copy the new interest group.

The point of doing this is to test a single interest audience in a separate campaign and copy the best performing ad groups into the CBO campaign.

Once these lapses, give the CBO campaign a copy of the new performance of the interest group. If all ad groups are equally interested, you should replicate new interests in your campaign.

Because FB optimization algorithms are best for a wide range of audiences, if you target only a small audience range, it is difficult to find a buyer in that range, CPM will be very high, conversion results will be very poor.

However, if the audience size is small, targeting similar audience will be very effective, although CPM is relatively high, but the targeting results will be more accurate. That's not ideal for audience size.

The whole strategy is to combine super-similar audiences with CBoOs. Because Lookalik audiences are the best targeting tool for FB ads, CBO is the best budget optimization tool. Together, they can take full advantage of FB advertising.

So how do you find a super similar audience? First, in the CBO campaign, 1% of the U.S. audience was tested, depending on how much data it had.

1. Start by creating a 1% similar audience (U.S., different personalized audiences), and all the ad groups created here are in one CBO series, and I'm usually set to $20 per ad group, so if there were 15 ad groups, I'd set the CBO campaign's budget to $300.

2. I looked at the icing over the past week, the last month's buyers, the past month's Facebook, the three best performing similar audiences.

5. This is a Super Audience CBO campaign. Just let fb run itself, optimize your budget, and even stop or copy ad groups to get the best results.

In general, the budget tends to favor 1%, 1% to 2% of the ad groups, while other ad groups will have less budget allocation. This is a very broad interest audience strategy that will cost some money, but it will help to expand. 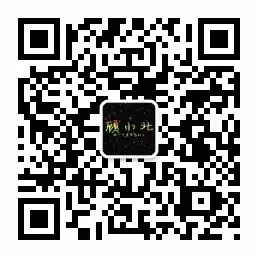 相关Read
更多文章
微信扫一扫
使用小程序
Cancel 允许
Cancel 允许
知道了
确定
SHARE ON TwitterRedditTumblrEmailBufferLinkedInPin It
How can I use Facebook's ad automation tool to de-stop traffic?
How can you use Facebook ads to make products explode during peak season?