How does Facebook's ad-scale pain break? Here's a free answer.

Facebook and Google account for more than 57.6 percent of the digital advertising market, according to eMarketer, while Facebook's ad revenue has grown at about 59 percent. 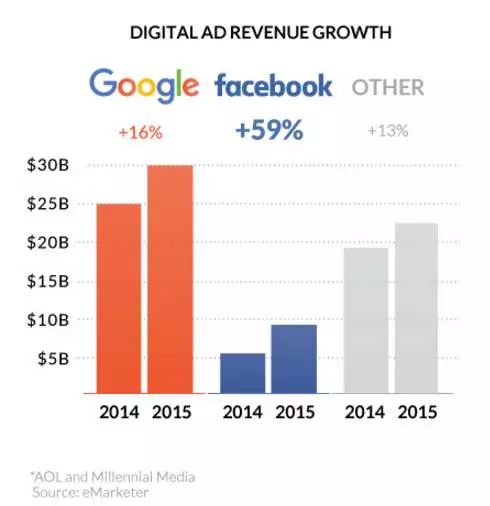 For apps and games out to sea, Facebook is undoubtedly the best source of traffic in several channels, but advertising on Facebook is not an easy task, and one of the pain points to be addressed is how to scale the delivery.

As we all know, Facebook's ad-building process is more cumbersome, complex functions, account opening requirements are also very high. But developers often have a product will have more than a set of promotionmaterials and campaign planning, which advertising audience targeting, material matching, the optimization means and strategy of delivery need a large number of repeated manual operations, so that many marketers do Facebook ads headache. And when the more ads there are, the more difficulties multiply.

So, in an effort to simplify Facebook's target, several Facebook's Chinese agents are rolling out more convenient Facebook ad delivery aids to facilitate Chinese companies going out to sea.

What exactly is the pain point of scale

Papaya Youguangtong's users are aimed at Facebook advertisers who already have some experience in promoting, such as mobile apps and mobile games.The scale and optimization of ads is the most important problem they need to address on Facebook.

One of the challenges faced by mobile game developers is that "games are a relatively niche type", so advertising should always pay attention to the accuracy of audience orientation to avoid audience overlap, and most mobile applications out to sea coverage is wider than the game, so the difficulty becomes how to scale the delivery, increase exposure , run the drop.

In the past, when building facebook accounts manually, in order to minimize the previously mentioned issues of targeting accuracy and overlap, ad delivery staff to manually set up each ad item and upload footage, resulting in a huge workload. This leads to reduced efficiency while amplifying the difficulty of large-scale advertising.

For example, a game has 10 different sets of creatives, while targeting 5 different groups of people, in the past need to upload all 10 sets of footage under each group, while developing the corresponding delivery strategy. And when advertisers need an account for an ad under an account for optimization reasons, the workload is staggering.

Performance in the cost of time, a medium-sized Facebook ad serving, if you use traditional ad production and creation methods to take 3 days of preparation time. This is when a Facebook-run aids are needed to help game advertisers.

How to solve the scale of papaya YouGuangtong?

Papaya Youguangtong has two main functions, one is account settings and creative upload.YouGuangtong can quickly simplify the process of building Facebook ad accounts, and advertisers can set up quick lying on demand. Second, eliminate the ad settings and upload in a large number of repeated operations, for example, in the previous example, the use of YouGuangtong, only need to select five different categories of different audience groups, and upload material once, the system will be automatically allocated, if advertisers need one-on-one, the system will directly arrange the combination, One-time upload to Facebook's advertising system.

For many marketers with experience in Facebook's ad delivery, they know exactly what their ad account structure and effect are going to look like, and you can build and run bulk ads through Youguangtong, which is what they need most.

The second function is data tracking.For any advertiser, Facebook's ad performance tracking is the most important part of ad optimization, papaya YouQuan can help advertisers set up custom data analysis panel, focus on analyzing the most important data, and can set automatic advertising optimization rules, when the optimizer rest, Background can automatically optimize ads based on rules to help advertisers increase efficiency and reduce risk. 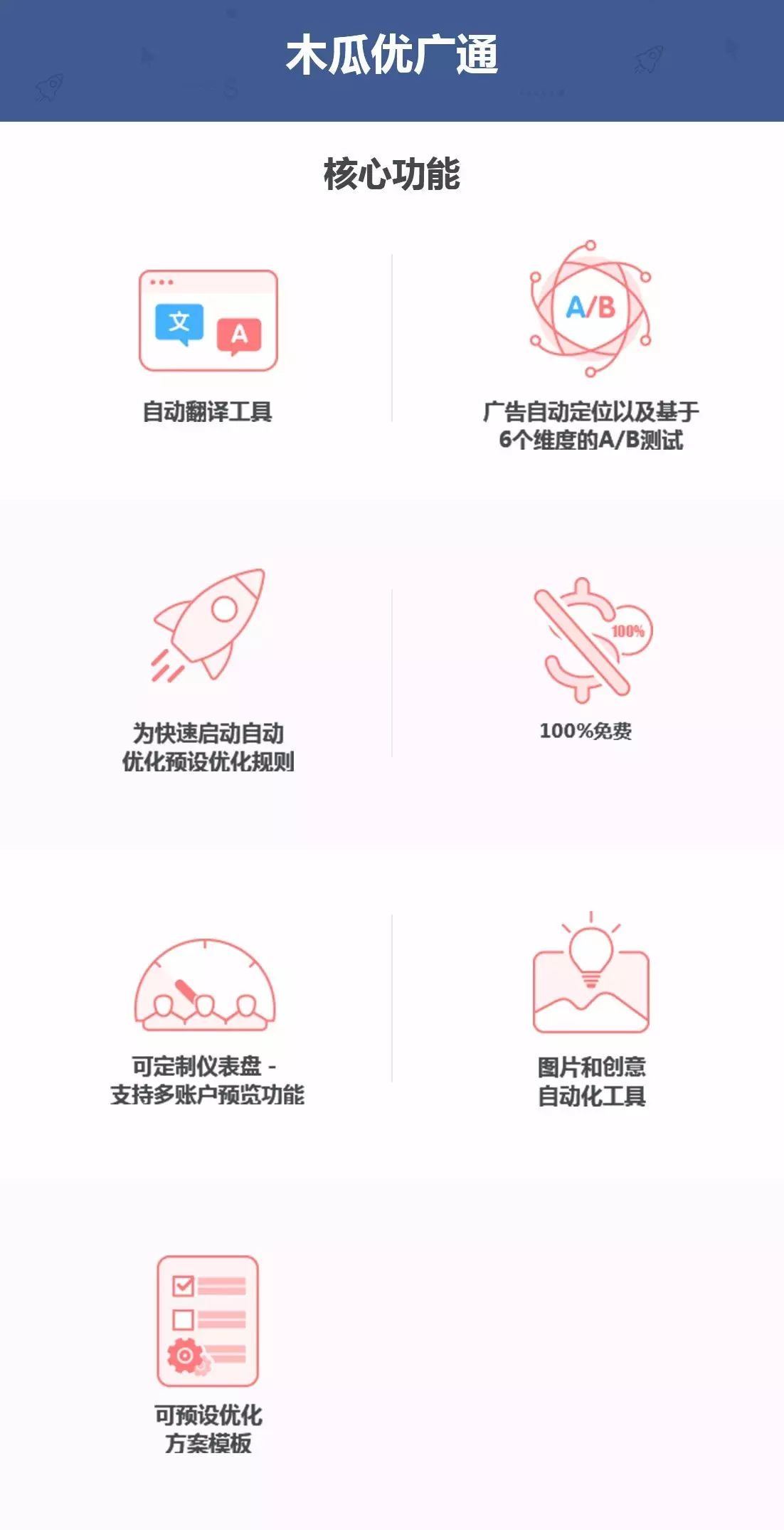 On Papaya Youguangtong, the goal of the campaign level is mainly divided into: website click and mobile app download two categories, under which YouGuangtong supports all forms of advertising on Facebook, including carousel, image ads, video ads and slide ads.Julie, head of Papaya Mobile Facebook, talks about the problems of unsuccessful uploads and slow time on Facebook's servers when the creatives are large, which can be avoided by the use of Amazon's AWS service. The experience is also better.

Because Papaya Youguangtong is directly through the API to Facebook's official backstage, it is functionally the same as Facebook's native system, with both audience screening and traffic choices consistent with direct delivery through the Facebook action desk. In addition, when Facebook introduces a new marketing feature, YouGuangtong will also be updated in a timely manner to ensure that advertisers can easily try new promotional features.

Papaya Mobile was created with the idea that the internal media buying team was better able to buy ads on Facebook, and that it could solve problems such as targeting more precisely and getting more traffic.But now it has been open to the public platform free of charge, providing them with high-quality free services.

Julie, the person in charge, said that SaaS products such as Yuguangtong are available at home and abroad, but foreign products usually charge a service charge of 10% to 15%, while in the domestic part, either take the fee model or only open to their advertisers. Papaya Mobile is a technology-driven company, in order to help more Chinese advertisers achieve the goal of going global, so papaya Mobile choose to open such a tool free of charge.

On the issue of lowering the sea threshold, Julie argues that one is to be efficient, and the other is to reduce advertisers' budget spending.From these two points of view, YuGuangtong first to achieve the improvement of efficiency, and its benefits are directly for advertisers to save costs.

At present, papaya YouGuangtong's customers are mainly mobile applications and games, another productPapaya Cross-Border GangFocus on cross-border e-commerce customers. Through the synergies of the two products, the vast majority of ChinaOut-of-sea enterprises, the total number of customers more than 1000. In addition to the free product offering, Papaya Mobile is also prepared to optimize the team as support, for advertisers and customers to provide varying degrees of training and services, for junior customers, papaya Mobile provides a one-stop promotional solution, and for professional and experienced customers, to help them identify and solve some of the optimization process challenges.

JulieIntroduced Morketing a case they have served for advertisers: this is an RPG game that has been online for 1 year, advertisers feel that the cost of acquiring new users is getting higher and higher, ROI continues to decline, the amount of new users can not support the game server healthy ecology, so they found them, It is pitched by papaya Mobile's game advertising optimizer.

Papaya game optimizer first communicated with the game operations department to understand the game's recent product update plan and user retention funnel. After confirming that advertisers have sdalled for all key nodes, the optimizer created three Custom Audiences for key nodes in the UGuangtong background: players who have logged in to the game in the last 7 days, players who have paid for it in the past 3 days, and players who have logged in to the game more than three times a week for the past 3 months. Subsequently, ads recalled by older users were placed.

After targeted optimization, the ad performance is obvious: ROI is 5.7 times higher, game DAU increases by 20%

As a top agent in Facebook China, leading technology and extensive overseas promotion experience are the most important foundations for collaboration between Papaya Mobile and Facebook.

On the trend towards going out to sea, Julie believes the dividend period still exists: "The sea has gone from 2013 to growth, going through three stages, from tools to games to a lot of content applications to the sea this year."In 2017, the out-of-sea industry will be further expanded, there is demand for out-of-sea, such as the tourism industry, airlines, smart hardware will become the new main force. "

As a service company, Julie reckons there is at least another two-to-three-year bonus period, and in the process, Facebook's importance will increase further, especially as quality traffic resources are growing tighter.

JulieThe promotion advantage of Facebook is divided into two parts.One is the particularity of traffic,Facebook's real-life targeting and the general digital marketing channels rely on "guess" to judge user attributes of the method is very different, it has the user's real information, although not displayed to the outside, but in the promotion can help advertisers to do a very accurate user targeting.

Second, Facebook can solve the problem of high turnover of applications and game products.Facebook offers SDK-based redirect recalls, which can also be addressed by Audience Network and a rich product matrix for long-term users who don't land on Facebook. Today, Instagram also offers advertisers a wider range of presentations and opportunities.

相关Read
更多文章
微信扫一扫
使用小程序
Cancel 允许
Cancel 允许
知道了
确定
SHARE ON TwitterRedditTumblrEmailBufferLinkedInPin It
Facebook: Advertising is our job, and it shouldn't be blocked by software...
Facebook Ad Goals How do I set your ad goals?