In the last two years, mobile advertising has had two stars: a native ad featuring Facebook and an incentive video ad.Both products perform well in service-performance ads, especially for apps that are checked out by the CPI, so they do well. (Facebook's brand advertising section lets us watch it later.) )

There is nothing new under the sun, and strict code farmers should form a good habit:When you see the surprisingly good effect, be sure to think for yourself, what is the root cause? This is by no means a gimmick for "big data, artificial intelligence" to fool the past.I have also studied and thought about it, and shared some interesting findings with you.

The content logic of this article is a little more complex, but I believe that after careful reading, your understanding of the core logic of advertising products will have a qualitative leap, so please read it patiently.

First, let's say something to less familiar readers about what's called attribution of effect ads. As the following image shows, when a user sees an ad in a dingpoint, they click on the ad if they are interested and reach the ad's landing page (here's the Apple Store's app details page); So how do you connect this process together to determine which ad serving a conversion comes from?The principle of attribution is this: when a click is generated, in addition to jumping to the landing page and sending a click link to the attribution monitor (generally a third-party product) and sending the user's ID as a parameter, and also sending a conversion link with the user ID when the conversion occurs; The attribution monitor matches the user IDs in both processes to know which channel a conversion is bringing. 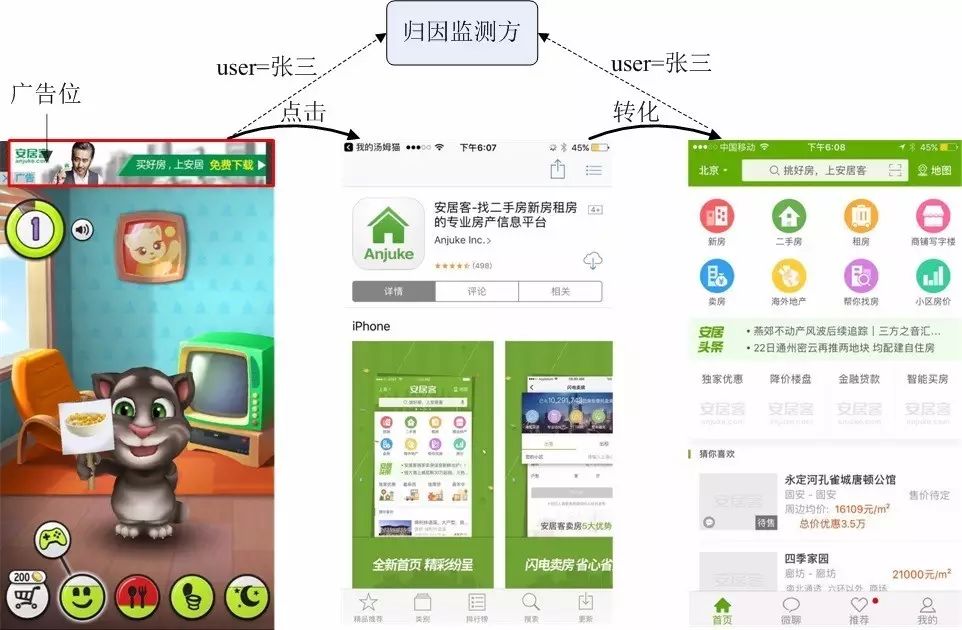 So if Baidu, QQ, a little information and other different media have the same ad click, and eventually produced a download, how should the conversion belong to which advertising channel? The most common approach is the "Last Click Effective" rule. As shown in the following image, users click on ads from four A-D sources, but conversions don't occur until they click on ads from the Direct Source channel. Thus, the credit of the transformation is written on the "direct source", and all the channels in front of it have become bamboo basketwatering an empty. 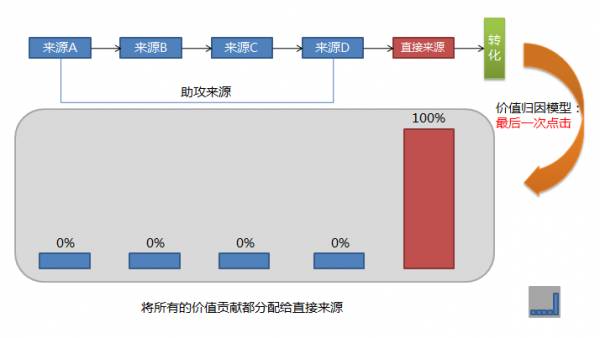 This is a rough approximate rule in the project, and it's easy to find a bunch of slot points:

Simple rough use, we are in the "Internet advertising cheating 18 kinds of martial arts (below)"Download attribution cheating in the article: In the attribution logic shown in the first image of this article, if the media has multiple minds,Tube his users do not point ads, simply use the program to the attribution monitor to send a link, tell him "Zhang three pointads!" "Then the next few days if just Zhang San downloaded the advertiser's app, then the credit is written to the media head!"If you send it to all users, it's yours to have the natural downloads in the App Store.

Some people will say, where so clever, after clicking After Zhang San really will download this app? In fact, this method is mainly used in those natural download volume of large advertisers, suppose you received WeChat, Uber this list, closed-eye robbery can also be daily into the fight. For advertisers, the effect and subsequent ROI are good, but the natural download volume has dropped inexplicably. Is the so-called big cake roll finger - eat from one another.

This way of eating in a way that is a bit ugly, big factories of course have to have a more gentlemanly approach. Let's start with how Facebook works. We look at the third-party attribution monitoring tool and understand the ad attribution logic developed by Facebook: According to the logic of the preceding article, the conversion always has to be effective with the click (corresponding to the click-attribution in the image above), but in the facebook of an acre of three-point land, the ad shows no matter dot dot do tat't count! Notice the "view-through attribution" clause in the image above.Remember the physiological health teacher said, the premise of carrying a child, always have to go through a love action film process, now how to become I saw you, the children born later have to be yours?Obviously, this is an unreasonable clause, but because of Facebook's traffic dominance, people have to accept.

Does View-through Attribution account for a high share of Facebook ads? Different advertisers have different data, about 10% less, and higher than 50%. Because of this adjustment in the rules, out of thin air more than doubled the conversion, you say the effect can not be good? Of course, you can reduce the impact by shortening the attribution cycle of View-through Attribution, but most customers are probably not sure, and that's the default configuration.

The average advertising platform doesn't have Facebook's voice, and launching a "view attibution" out of thin air is likely to be accepted. To continue to do the article, we must make the conversion process a little more complicated, so that you can take advantage of attribution, here is to talk about the motivation video in this form of the mystery.

Incentive video is a new form of mobile advertising that has flourished in recent years, representing companies such as Applovin, Vunglecolony, Add, UnityAds, and more.Unlike the intuition of video advertising to serve brands, motivational video is precisely the performance of advertising in the field of outstanding performance.Eventful we, of course, to hold the envy of envy of the dark psychology to find out exactly. The conversion process for motivational video ads is more complex than the average display ad, see the figure below:

In general, motivational video ads have game scenes, for example, in the example above

See here we should understand, why in the ad when the end of the click link? Users after watching the video, does not mean that they are interested in downloading ah! Even if the user doesn't click spontaneously, since the link has already been sent, if the app happens to be downloaded on the Apple Store in the next few days, it's the performance of the ad platform.

Of course, facebook and Applovin's two approaches are not entirely unreasonable: after seeing ads, it's a bit of a help to download, especially video, a informative form of advertising.However, the rules themselves are not absolutely right or wrong, and it is important to be fair.If everyone is to see who is pregnant at a glance, compared to the eyes of the words, is also fair;

All right, that's it. As mentioned earlier, our purpose is not to black.FacebookOr some other company, but to put out the product's nature of the problem and confusion to discuss. In fact, since the emergence of online advertising, how to design a recognized and reasonable attribution rules, has been the market has been the outstanding puzzle. Therefore, it is rather helpless that a particular media or an advertising platform is not so good or bad, not so much the algorithm and data since then, more often rely on their attribution chain of the card bit. Take search engines, but also because of the close to the end of user decision-making, attribution on the big advantage.

So, to improve the performance of your advertising products, in addition to“Cloud Computing, Big Data, Artificial Intelligence”These formalist words, do you have a new way of thinking, feel open-minded? 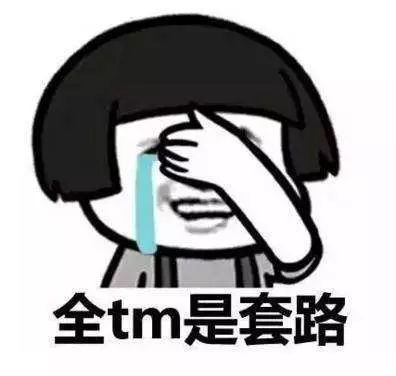 Learn about live trailer:In response to the vast number of people to eat melon requirements, we will be the Internet field of common means of cheating made a comprehensive arrangement, with the form of knowledge live to do a systematic introduction.For the widespread spread of negative energy, we set the price at the lower limit of 9.9 yuan that is known to be allowed.Please click on the bottom "Read the original" to see the details!Whether you're determined to clean up traffic cheating or actively engage in the cheating industry,After participating in this Live,will all have a solid intellectual preparation. 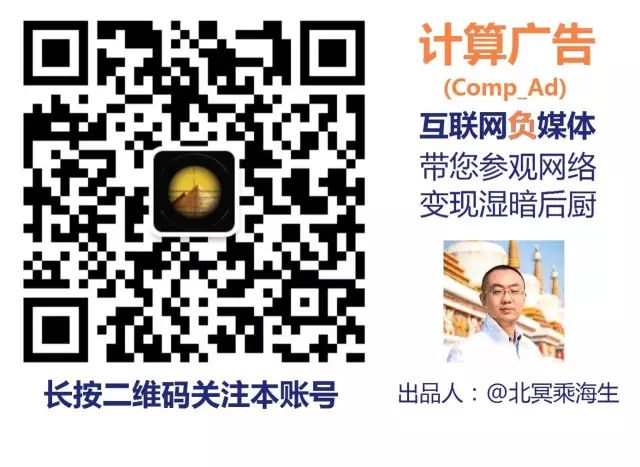 Scientists don't have any surplus food!

1/3
Read the original
Read
Synchronized to take a lookWrite down your thoughts.