The tragic death of a 21-year-old college student Wei Zexi, caused a lot of concern, pointing directly to two surface problems, the first Baidu's bid ranking (now renamed Baidu promotion, soup does not change medicine), now in Baidu input some diseases, has not seen the link to promote, should have been temporarily off the shelf. The second is the outsourced hospital of Putian Opera.

This incident, like an explosive bag, once again ignited the domestic public's concern about the current network of false advertising, in contrast, we need to look back on the same search giant Google is how to deal with the problem of advertising.

Searching Google for Wei's sliding sarcoma, which is also visible in medical ads, has a very clear sign. More importantly, Google's paid advertising does not affect the ranking, and the top of the list is always the relevant encyclopedia knowledge or official institutions. 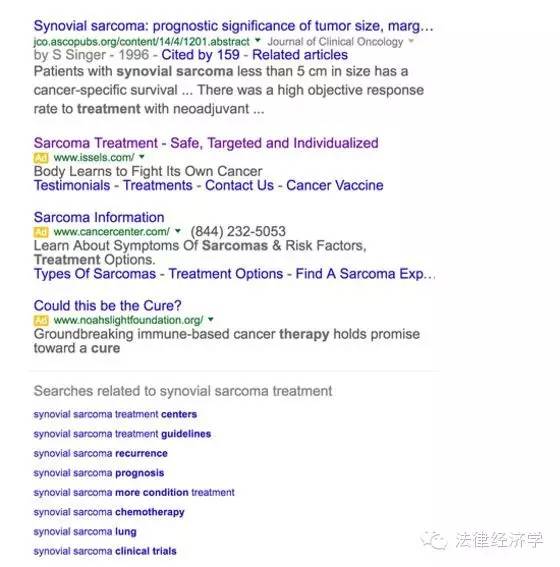 Coupled with Google's proactive automated ad filtering mechanism, in most cases, this can effectively eliminate the possibility of seeing fake medical ads at Google. According to Google's report, they pre-empted 780 million illegal ads and blocked 214,000 advertisers last year, including 12.5 million illegal medical and drug ads for reasons such as unapproved drugs or false and misleading propaganda.

If you put Baidu's comparison with Google down to corporate ethics, it's undoubtedly the simplest but lazy interpretation. But why can Google do not do evil, Google really never do evil? If you look back at Google's past on fake medical advertising, you may be surprised to find that Google has also fallen on the issue, and has been severely punished. But that's why Google has always felt the push from behind it, constantly improving its advertising review mechanisms and employee ethics.

As early as 2003, Google was questioned by three different committees in the U.S. Congress over online drug advertising. In July 2004, just a month before Google's launch, Sheryl Sandberg, Google's vice president of global online advertising, rushed to Washington to testify on the issue, as U.S. senators planned to pass two bills to regulate online pharmacies. The current Facebook COO claimed at the time that Google would strictly censor Internet medical and pharmaceutical advertising through a third-party certification service.

But the series of negative events that followed showed that the world's largest search engine was getting caught up in negative news from time to time, even though Google executives had long been aware of the problem with illegal drug advertising. The David Whitaker scandal of 2009 brought Google's first image on the issue, making it truly aware of the dangers of fake online advertising and the sense of responsibility that search engines have to the public. Also in that year, Baidu was exposed to false medical advertising.

In August 2011, the same month that Google announced its acquisition of Motorola Mobility, Google settled with the U.S. Department of Justice over illegal online pharmacy advertising, for which Google paid the company's highest corporate fine of $500 million. The U.S. government has always been known for its "hard-heartedness" in punishing corporate violations. Google's penalty record has long been broken by two car companies. In 2014, Toyota was forced to reach a $1.2 billion settlement with the U.S. government for concealing the problem of speeding doors. However, the new penalty record is no doubt owned by Volkswagen. Volkswagen could end up with up to $18 billion in fines from the U.S. government for the emissions of 600,000 diesel cars late last year.

Whittaker, a fake drug dealer in the United States, has long sold counterfeit drugs to U.S. consumers online, falsifying growth hormone and steroid drugs with vegetable oil and protein powder; a bottle of steroids for up to $1,000 is even worth nothing. He faces up to 65 years in prison (at the age of 34) after being extradited from Mexico to the United States in 2008. In exchange for a commutation of his sentence, Whittaker confessed to u.S. federal investigators that Google's advertising salesperson had offered to help him avoid Google's filtering mechanism and run fake drug ads online, knowing it was illegal.

Given Google's good public image, it was clear that his confession alone could not be used as a valid confession, which even the judiciary could not believe at the time. Whitaker, who did not want to die in prison, worked with the U.S. judiciary to complete one of the most famous phishing investigations in the history of fake drug advertising online in the United States. The judiciary falsified Whitaker's new identity, Jason Corriente, the CEO of a nonexistent online advertising agency, to try to get the fraudster to repeat how he worked with Google's advertising sales staff to sell counterfeit drugs, thereby taking legal action against Google.

Through a $20,000-a-month ad, Whittaker was offered a google-designated ad customer service. In several phishing investigations and forensics, Google customer service actively helped Whitaker optimize, analyze, select and buy keyword ads, and even helped him to make a face-to-face change of his website, by temporarily removing the first-page drug ads and buying keys, masquerading as a medical information website through Google's automatic audit mechanism, Then resume the purchase option.

The phishing law enforcement, which cost the U.S. judiciary $200,000 in total, ultimately cost Google $500 million in sky-high fines. To prove that this was not the rat behavior of individual Google employees, the U.S. justice sleuth instructed Whitaker to work with Google's customer service representatives in California, Mexico and China, running illegal ads related to steroid drugs, and even involving the strictly controlled abortion drug mifoxone and psychotropic substances.

The Wall Street Journal, Wired and other well-known media with "this professional fraudster cost Google $500 million" in-depth report ingress about the case that made Google face down the face of the phishing law enforcement. Whittaker eventually reduced his sentence from the original 65 to five years in a "significant realization." Although he can avoid dying in prison, the fake drug fraudster faces up to $10 million in compensation from victims of previous counterfeit drugs.

Peter Neronha, the US attorney at the time, told the Wall Street Journal that some Google executives were aware of illegal pharmacies running search ads on their websites. "Based on the documents we reviewed and the witnesses, we learned that Larry Page himself knew about it. "This statement is clearly shocking and has had a serious impact on Google's image of non-evil, which Google strongly denies.

After the popularization of the Internet, search engines have not only become the main source of information for the public, but also an important way for them to seek medical treatment. As early as 2010, Google estimated that 100 million Americans had conducted 4.6 billion health-related keyword searches that year. According to a Pew survey that year, as many as 60 percent of U.S. adults search for health information online, and 60 percent of Internet users think searching for information will affect their health decisions.

Because of the high cost of health care in the United States, many uninsured patients choose to buy controlled prescription drugs through online pharmacies abroad in order to reduce the cost of seeing a doctor. From 2003 to 2009, Google provided advertising support to online pharmacies in Canada and Mexico to help them run and optimize Adwords ads, according to a settlement with the Justice Department. Not only does this help them sell drugs online to U.S. consumers, but it also makes it possible to obtain prescription drugs and substance abuse illegally.

Since 2009, the U.S. government has stepped up investigations into illegal online medical advertising, and Google has been constantly improving its own advertising controls since then. In 2009, the FDA's Drug Marketing, Advertising and Communications Division (DDMAC) sent a letter to 14 pharmaceutical companies, arguing that drug search ads they had run were misleading and that they had only described the risks of efficacy without adequate disclosure of side effects.

At the end of that year, the FDA, in conjunction with other government agencies, conducted a week-long joint investigation that found 136 websites involved the illegal sale of unapproved or mislabeled drugs to U.S. consumers. Based on the findings, the FDA then sends warning letters to the operators of these websites and requires Internet service providers and domain registrars to terminate the services.

It was that year that Google began taking steps to stop online pharmacies from illegally selling prescription drugs to U.S. consumers. Starting in 2010, all internet pharmacies that run drug search ads on Google will have to obtain a U.S. government-issued Internet Pharmacy Practice Certification (VIPPS) and online advertisers of prescription drugs must be certified by the NabP Network Advertising. Then, Microsoft Bing and Yahoo implemented a similar policy in June of that year.

Under rules implemented by the U.S. Pharmacy Council in 2014, only drug sites that comply with local and local regulations can register domain names and provide services, meaning that licensed online pharmacies in other countries cannot sell prescription drugs to U.S. consumers. In the same year, Google announced a $250 million special fund to crack down on "illegal online pharmacies", while increasing the display of prescription drug abuse-related content and working with legal pharmacies to crack down on the marketing of illegal pharmacies.

The U.S. government's campaign against fake drug ads also includes ads for a variety of nutritional health products. In June 2012, the FDA ordered Google to block all advertising accounts in the U.S. that offer detox and sepsis health care products, meaning that many health care products that are sold as "detox if you detox and remove heavy metals from the body" won't be able to advertise on Google. It's worth noting that the FDA did not hold a hearing this time, nor did it inform the companies in advance or afterwards, or even give them a chance to appeal and explain.

Global Healing Center, a detox health care company, is a long-term co-founder of Google Search Ads, which generates hundreds of thousands of dollars a year in Google. Their sales plunged 25-30 percent in the week after the ad accountwased was abruptly blocked, and their revenue lost $70,000 in a month. Google gave them an explanation a month later because the FDA identified all over-the-counter antidote products as non-approved, "dangerously misleading" and potentially damaging to consumers' bodies, and asked Google to block all drug ads involving "heavy metal detox".

Thank you for reading! Legal Economics advocates "scientific truth-seeking, system effectiveness" and pushes a classic popular article in the field of legal economics every day. 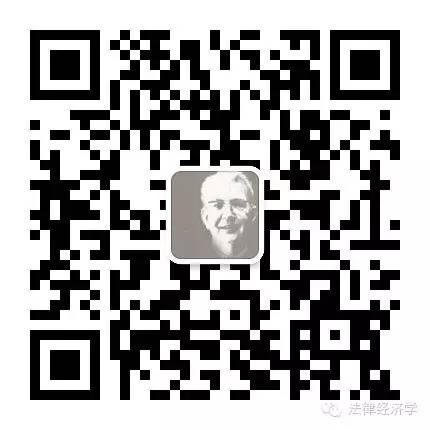 I thought it was a Google Glass ad, but it's not good to see the whole person.
Google's new ad strategy seriously impacts OTA giant traffic and performance
3 Ways To Combine Facebook and Google Ad
Still without traffic for Google ads? That's because your ad doesn't show up at all...
How can Google ads be optimized to outperform competitors?