Google has changed its advertising bidding model, can it change the digital advertising industry?

Bianews reports RecentlyGoogle announced that it would change its advertising bidding model by the end of 2019, from a second bid to a first bid.

As part of the change, Google will unify its multiple bids. In the first bid mechanism, all program-oriented buyers will compete with direct advertisers in a single bid. Bids are not shared with other buyers prior to auction, nor will prices be set for other buyers.

PreviouslyAppnexusAndRubiconOther mainstream advertising markets, as well as major supply-side platforms, have been starting to take up the first bid since 2017, and now Google is joining the adjustment team.

To know that the main mode of the current Internet auction is the second price auction, domestic and foreign major Internet companies, we are familiar with Baidu, Sina Weibo and other advertising platforms are to take this way of bidding.

In fact, public information shows thatGoogle was the first Internet company to take a second bid.

So why did Google announce that it was abandoning this model? How will this shift change change Internet advertising bidding?

What is the difference between first/second-price auctions?

British AuctionsIt is our most familiar, seller selling items, buyers from low to high bid until the auction time closes, the highest bidder gets the item. The advantage of this model is that the rules are easy to understand, so we can often see them in film and television.

Dutch AuctionsOn the contrary, the seller first makes a very high price, and then the bid decreases from high to low, until the first buyer is priced.

First price seal auction, commonly found in a variety of projects that require bidding, the buyer writes his bid in an envelope, many buyers bid, at the same time reveal the envelope price, the highest bidder bid successfully.

Why is such an auction mechanism in place?

The first bid bidding mechanism has two major flaws in the repeat game:

First, it does not meet the best pareto, but the bidder with the highest valuation of the subject matter is likely to lose the chance to win the bid in the repeat game;

"Second, the price offered by the highest bidder is the final price to be paid, so for the purpose of reducing expenditure, the bidder will try to reduce its bid as much as possible, often at a price that does not meet its true valuation of the subject matter and does not maximize the seller's interests."

In the second-price auction mechanism, the best strategy of the bidder is to bid equal to their true valuation of the subject matter.

When your bid is equal to your true valuation, if the other bidders bid more than you, then you lose, because you can't make a higher price than this, make a higher but lose.

And when other bidders bid below your bid, you give you the highest price you can accept, you can increase your chances of winning, but your bid doesn't determine the price you ultimately have to pay, so you don't have the incentive to lower the bid.

Therefore, the second-price auction is an effective auction mechanism. AndThe auction is eventually obtained by the highest bidder, which also enables the buyer and seller to achieve the best pareto.At the same time, there is considerable stability, that is, advertisers do not frequently adjust their bid motivation.

In game theory, there is a unique Nash equilibrium for "sealed second price", i.e. everyone is the best strategy for their true valuation of the commodity.

Under this mechanism, advertisers who are always the most valued on advertising space sit win, while ensuring the platform's revenue.

The creator of this auction, the economist William Vickery, also passed a paper published in 1961Anti-speculation, Auction and Competitive Sealed TenderingChina systematically discusses this auction method and won the Nobel Prize in economics.

Internet advertising that benefits from the bidding model

First of all, it is difficult for internet advertising to make a public bid, so British and Dutch auctions are not suitable.

SoBoth Yahoo and Google adopted the Broad First Price Auction GFP model early onSimilar to the traditional first-sealed bid, the high bidder gets and needs to pay for the offer he or she made.

But the Internet advertising auction is not a single act, and it is not only a subject matter (advertising bit, advertising time), in a large number of timesIn a repeat game, advertisers can adjust bids.

Therefore, if the first price bid, the price of the advertising position is extremely unstable, it will show the situation in the figure above. Platform-side earnings can also become volatile and bid inefficiently.

The broad dicifal model is similar to the traditional second sealed bid, where the high bidder gets and needs to pay the bid for the secondThe quote made by the high, plus a minimum.

Therefore, it can be said that GSP is designed for the specific environment of online advertising, the second-price auction is the optimization and upgrade of the first bid mode.

In this mode,Internet companies have achieved great commercial success.

So why is the attitude of companies like Google starting to turn around the auction?

Sam Cox, who is responsible for Google's advertising management, said in his product release note:"Too complex an advertising environment is bad for advertisers and publishers , who can't accurately estimate the value of ad inventory through programd transactions, and publishers (media and app developers) have a hard time effectively implementing content realization strategies."The entire digital advertising industry is becoming increasingly opaque.”

He believes the first bid will increase transparency, reduce the operational complexity of sellers and make it easier for buyers and agents to reasonably value inventory. The "increasing complexity" of the programmed market has forced people to turn to first-time bids.

In practice, the specific implementation of Vickery auction will encounter many difficulties, such as the auction process between bidders collusion, auctioneers and bidders colluded, auctioneers lost the price of such a transaction may undermine the effectiveness of this way of dealing.

The second-price auction is a stable auction mechanism, butIts anti-cheating ability is not strong, if there is collusion between accomplices, in this bidding mechanism, complicity will be easier to achieve.

Most auction theories are devoted to the fairness and fairness of buyers and sellers in the rules, but they ignore some of the off-market operations and the unfair transactions they cause. 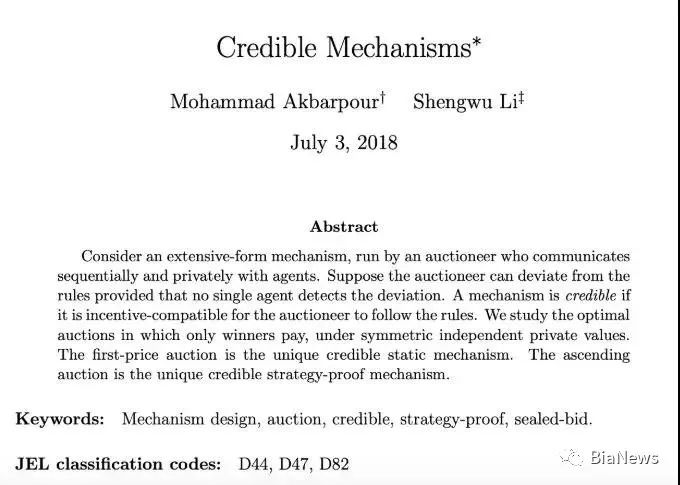 Professor Li believes:"The first bid model can crack down on some attempts to break the rules, in which it is difficult for auction operators to manipulate prices with a covert operation. "

Whether it is the first or second bid, there is no way to avoid "buyer collusion", if buyers know each other's price information, they can join forces to press the price.

In the second price auction, a buyer's platform compares the bids of all buyers within its control and submits only the highest bids to advertisers.

In the first bid, the buyer's platform, which uses the buyer's information exchange to make a profit, no longer exists.

The more transparent the bidding environment, the greater the market effectiveness. Google chose the latter between revenue stability and market utility.

Google will begin transforming its media ad inventory into a unified first-price auction model in the coming month, with the transformation expected to be completed by the end of the year.

Since the change from second-price to first-time bids will require buyers and sellers to change their programal strategies, Google said it would give everyone time to prepare in the next few months before starting testing.

In fact, the opacity of digital advertising is a waste of energy for both buyers and sellers.

Program-oriented bidding, some advertising inventory lack of bidding, media advertising position price can not be raised, in order to avoid cheap sales, the media usually use the bottom price strategy to maintain their own earnings.

In addition, Google hasLast Look mechanism，After the auction, Google allowed "a penny more" to win ad inventory, allowing its AdWords and DSP buyers to increase their winning percentage and get valuable inventory at a good price.

"last look" ostensibly makes it easier for buyers to get inventory, but it's also Google's privilege.

And switching to the first bid also means to theThe privileged mechanism that has been plagued by media vendors has been a farewell because it is incompatible with the initial bid mechanism.

In addition, people familiar with the matter revealed that Google is creating a unified bidding tool that is said to simplify the bidding process.

With the transparency and simplicity of the Internet advertising bidding model, we may be able to expect a new stage in the field of digital advertising.

Bianews is recruiting journalists in Beijing. Interested students can whip up The Twitter (ID: cindyween). Looking forward to talented and fun you join!

Bianews recently struck a partnership with linx, an e-cigarette start-up brand, to offer Bianews 10 disposable e-cigarettes for the same-day reader's benefit, priced at $59 each.

In fact, the activities began two days ago, the good news now is that this benefit will always be there this year!

But the rules of acquisition change with the mood of the whip:Today or the article message point top ten, the post station record prevails. Whip brother will then be excluded from the heart-to-heart message, and the same ID users can be limited to a maximum of two times a week!After all, I hope you really love the news we're pushing every day.