GoogleComing up at the annual developer eventI/OA series of new products were unveiled at the conference, but a disappointing quarterly report was delivered.

On April 29th Alphabet, Google's parent company, reported quarterly revenue of $36.3 billion, up 17 percent from a year earlier and well below the 26 percent growth in the same period last year. Google's total revenue was $36.169 billion, up 17% year-on-year. Growth in advertising revenue from its core business fell to its lowest level since 2015.

Google's advertising business is in increasing competition with Facebook and Amazon, which have just posted higher growth in earnings reports. The smartphone market is already struggling as Google's massive investment in hardware and cloud has yet to reap strong market returns.

Google CEO Sundar Pichai explained in a conference call that Google is a company focused on long-term growth and continued investment in research and development, focusing on mobile business in the last phase, with artificial intelligence in the future. Artificial intelligence has been rooted in Google's range of products, from search services to hardware. Google will continue to grow advertising services, machine learning, Google Cloud, and smartphones in the future. Investment sq.e. in the cloud business, search, and machine learning will continue to grow in the second quarter.

Google's quarterly advertising revenue was $30.72 billion, up 15 percent from a year earlier, down from 24 percent in the first quarter of last year and slowing to its slowest pace since 2015. Facebook and Amazon are stoding Google's advertising and search markets, with Facebook's ad revenue growing 26 percent in the quarter and Amazon's at 36 percent. 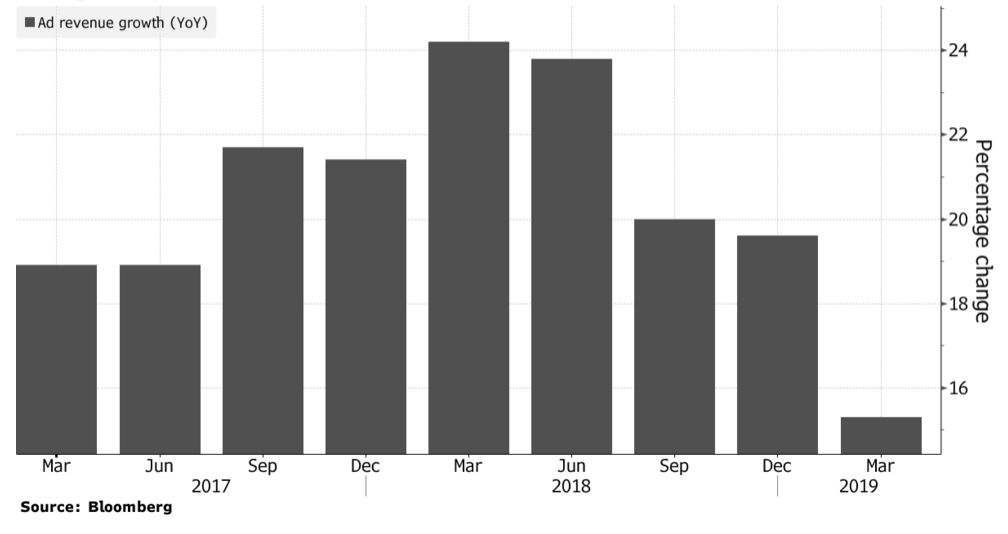 Pichai responded by saying that nearly half of the U.S. advertising budget is still online and there are still many opportunities for digital advertising. So Google is investing in improving the search user experience, using machine learning to help users and advertisers.

Google's operating expenses have risen sharply year-on-year, including massive hiring to boost the cloud business and $1.697 billion in antitrust fines in the European Union.

Alphabet's first-quarter net profit, which included fines, was $6.657 billion, down 29 percent from $9.401 billion a year earlier.

Google has been adding to its cloud business, with new employees, mainly technology and sales staff in the cloud business. Google has only about 85,000 employees in the same period last year, and has risen by more than 103,000.

Google's cloud business has started out behind its competitors, with a focus on using the cloud as a platform to develop artificial intelligence applications, but revenue growth has been mixed. Google, which hired Thomas Kurian, a former Oracle executive, to take over the cloud business in November, launched apps that are compatible with different cloud platforms this year and is expanding its sales staff in the hope of gaining more corporate users to gain a bigger market share.

Google has also been investing in hardware products, which it plans to use to promote Google's online search and other software services. For example, the phone Pixel and Google's telecommunications service Google Fi jointly expand the market, with smart home products to promote Google assistant and other applications.

Google is also focusing on YouTube video products and has set up an enterprise sales team for its cloud business, hoping to be an important source of revenue growth.

3) Keep an eye on Silicon Star!

After reading Google's new ads, too burning, no longer want to use Baidu!
Google announces ban on cryptocurrency ads: Too many scammer
How do I create a Google ad? Introduction to the Google Ads launch proce
How poor is Google ads? It could be a pot of quality points! 3 Key points to improve ad quality
Google ads clamour for Apple; Vision China resumes operations; Peace Elite earns nearly 100 million in 24 hours in three day