Google's average ad ranking is about to be replaced: How can new metrics be used to optimize Google ads?

Good readers, I don't know if you noticed, Google has announced that from September will no longer support the "average ranking" indicator:

I've been running Google ads myself for years, and when I saw the hammer news, I was a little emotional.

The average ranking is one of the oldest indicators, and its retirement can really feel a little overwhelmed at first.

But considering the experience of advertising, this change isn't necessarily a bad thing, especially given Google's new index of replacing average rankings.

First, here are the new metrics That Google has launched that officials say can help us better understand the effectiveness of our ads, which have been around for a long time, but will officially replace the average ranking metric by the end of September.

What does it mean to head and absolute top?

These two terms refer to locations on SERP."Top" refers to all ads that appear above natural results. "Absolute top" refers to the first ad, which is the number one ad. 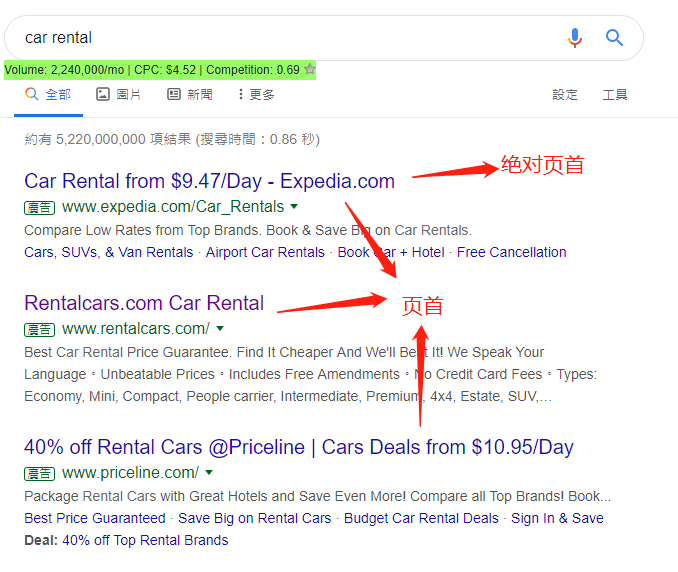 Metrics to note when optimizing

Once you find yourself losing your page head display share, the following metrics help guide how we optimize.

Google provides us with budgets and rankings at the top or absolute top of the page to lose show share:

Here's why the new indicators are more instructive:

Why average ranking is a less friendly indicator

Average rank is a basic metric in search ads and may be included in manager accounts as well as many reports.

Because while it may be a good indicator, it can easily lead to confusion.

Here are three scenarios in which the average ranking disadvantage sits and how we use the new metrics to make better decisions.

Both ad examples show an average rank of 4.0.

The average ranking numbers are the same, but it is clear that the first ad is better than the second.

This is because not all search results pages (SERPs) show ads in the same place. The number of ads displayed and the appropriate location on the page depends on whether the ads are relevant and rated.

It's not just the ad itself, it's also about search.

What do you mean?

If your search term or search intent is less commercial in nature, you'll see fewer ads than you see when you use a commercially high search term.

For example, use an incognito browser and search for the pet bed pet bed (possibly a commercial) and the purchase of pet pet bed (absolutely commercial) and see how many ads and where they are on the page. 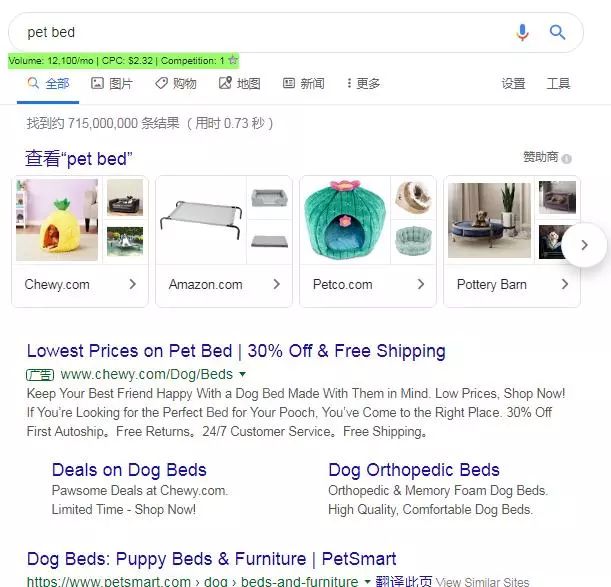 If the search term is judged to be a commercial and the ad is eligible to appear, the relevance threshold for the top of the ad comes into play.

Relevance is calculated by the Quality Score system, which predicts the click-through rate (CTR) of your ad and tries to predict the percentage of clicks for each ad in each auction.

If your ad doesn't meet the relevance or quality threshold, the agency will appear on the search results page, but it may not appear above natural results.

Because Google wants to show users the most useful results, if the ad doesn't look relevant, it may downgrade it to the bottom of the page.

With the new Impression Top (%) metric, we can better understand whether our ads meet the threshold of display at top of the page.

In the two examples A and B mentioned above, Ad A is in 4th place and appears at the top of the page, and the ad is not a big problem.

But another ad B with the same position 4, although ranked fourth, but he did not show at the top of the page, this situationThe Impression Top index is usually low。

So you know, you need to continue to improve the quality score of your ads.

Average ranking gives us the illusion

Average rankings are often thought to be indicators of where ads actually occupy on SERP, but this is not the case. Instead, the average rank also indicates where the ad is relative to other ads.

To illustrate the difference, consider that an ad with an average rank of 2 may be found at the bottom of the results page, as it is indeed the second ad for the entire page (assuming there is only one ad at the top of the page).

In these two different examples, Joybird's ad,The average ad ranking in the first picture and the second picture is 2。 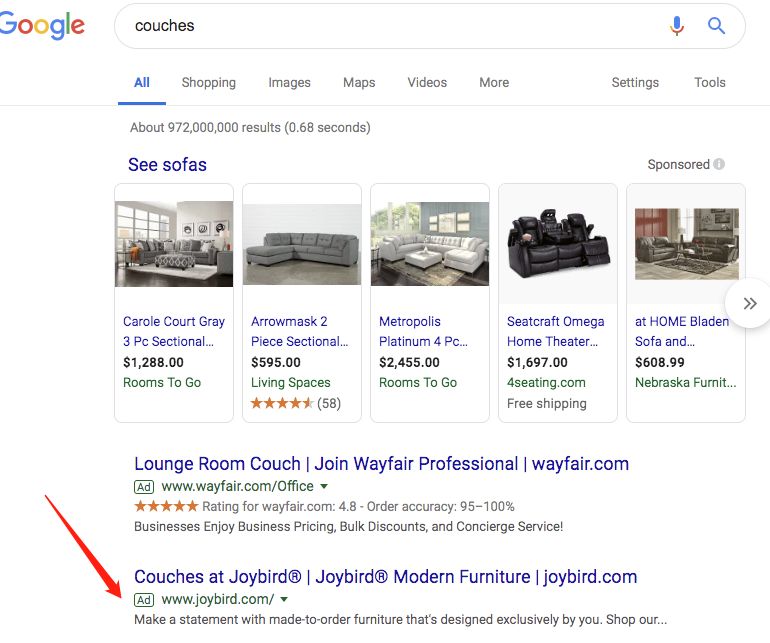 Let's give you another example.

The average ranking of the three ads is 3.0. However, the average is virtually useless in helping to understand what can be optimized.

Here's where your ads are shown: All have the same average, but it's calculated by different placements:

If we can understand where the average ranking is calculated, we can make better optimizations, but:

None of these figures are known.

Ad 3Top impression %is only 50%(Because the first impression is 1, the second is 5), if we use 3 of the average rank value as a reference, we have the illusion that our ads will appear in the top 4 and may appear at the top of the page - but not - so if you want your own ads to appear in one of the first four ads on the page, There is a need to further optimize your advertising to increase the value of this indicator.

With these new indicators, we can make more informed decisions with a clearer picture.

Average rankings are only recorded when there is a presentation

In this case, both ads get an average rating of 1.0, but only one of them will always occupy the first ad position. The other one doesn't really have that many show opportunities, but when it's shown, it can be in the first place:

This is yet another situation that gives us the illusion.

On the other hand, Ad 1'sTop Impressions Share - Search top IS is only 33%。

That way, we know which ad ranking sits significantly.

And there'sShare of top impressions missed on the search network due to ratings (ranking) - Search lost top impression share (rank) metric， We can better understand when our ads rank and try to fix them.

Even before the new ad ranking metrics were released, the information that average rankings could provide was vague.

For example, the following ads rank on average 1.5. However, when I see the impression share, I'll know that the ad has only a 50.98 percent chance of meeting it.

Absolute Top Absolute Top and Top Impression Share metrics at the top of the page provide more background information for your ad's placement.

Now look at the Absolute Top and Top Display Share metrics, it's clear that this ad only appears in the first few results in 32.66% of the time (Search top IS) and only 21.99% (Search abs. top IS) in the first ad position.

If you look at the new metrics for the ads in the example below, even though the average rank looks strong (1.5), 78% of the opportunity to show at the top of the absolute page is missed because the ad ranking is too low (Search os lost. top IS rank).

By improving the quality score, increasing the bid, etc., the share will decline.

If you don't care much about absolute toppage, just want to make sure your ad is shown in an ad at the top of the page, refer to the top impression share metric.

As shown below, this ad lost 67.34% of its page-top impressions due to its ad ranking. Again, the 1.5-average ranking inside is just an average reference value, don't worry too much. Note that this ad is not subject to budget constraints (high budget), so Search lost top IS - a percentage of the show share lost due to a budget shortfall is 0%.

Next step: How to optimize

You might think that if your show share is low, you'll need to raise your bid immediately.

But it doesn't necessarily work, and it even reduces the show's share!

BecauseHigher bids will give keyword ads more opportunities to participate in the show, and in the new display opportunities, it is possible to get a lower placement, the share of 100 percent to lower。

A good practice is to:

When referring to the display share, at the same time look at each click-through cost, if the share is relatively low, and the cpc is not high, it does not need to do much change.

If the share is relatively high and the cpc is also high, consider lowering the offer, because maybe your offer is too much.

The ultimate goal is to show a high share and a relatively low level of cpc.

Using average rank as a reference is not the most effective way to adjust your bids.

If you use Average Rank as the criterion for automatic bid rules, consider modifying the criteria to include impression metrics.

When setting up automatic bid rules, all new ad ranking metrics are available in the Conditions section, such as: 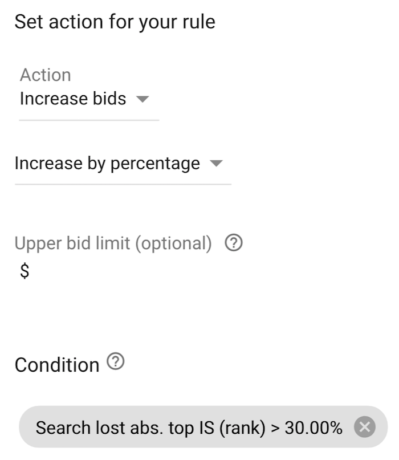 Here's a simple example: when the absolute top display share lost due to poor ranking is greater than 30%, the bid is automatically increased.

You can also use tROAS or tCPA and increase the percentage of ad ranking and impression share.

It's a good idea to start an experiment in Google ads to see how adjusting bid rules affects performance.

The average ranking at the end of the month transitions to the new ranking indicator.

But given that the average ranking is likely to mislead us, we need to familiarize ourselves with the new metrics as soon as possible.

Finally, review the Chinese-British expression of the relevant indicators: Go out to sea together and progress together

Go out to sea together and progress together

Ads, ads or ads, it's time to get out of Google search
Google's ad revenue growth slows, will push map pay-for-advertising busine
With $270 million a day, how does Google's advertising system become a money-printing machine?
How do I run ads on Google Ads? In just 12 steps, teach you how to advertise on Google!
Google Ad Country