The following article is from Xiaoqian Notes , author Xiao Qian

Xiao Qian, a columnist for dozens of well-known science and technology financial media. 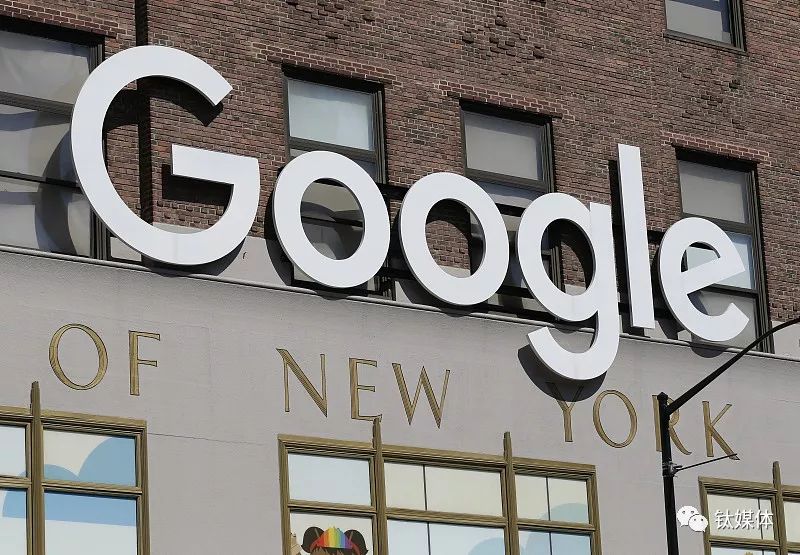 An occasional search query let the author find: Google search also exists medical ads, and even medical ads there are some exaggeration phenomenon.

Is Google still the one it used to be?

On September 3rd, the Wall Street Journal reported that when searching for "apple tech support" on Google, a fake Apple phone number promotion appeared, raising concerns about the security of search ads.

Medical ads are likely to make users feel more anxious than scam ads. From the birth of human beings to death, medical care has always been a service that can not be ignored, medical advertising is a topic that every search user is very concerned about today.

Recently, a casual search query let the author find: Google search also exists medical ads, and even medical ads there are some exaggeration phenomenon. Why did some of Google's out-of-standard medical ads appear when foreign regulators have punished Google? If google medical advertising is compliant according to China's Advertising Law standards?

Google is not searching for clean soil,

First of all, we can first understand the next hospital keywords advertising recommendations. When using Google to search for the words "hospital" "hospital" and "hospital", Google search really does not show the relevant advertising results, Google in the most basic keywords above or certain.

But if you combine the above keywords with the local, the results are significantly different. When we search for "clinic in South Africa" (swapping South Africa for Kenya, Pakistan and even the United States), Google will see ads that are vaguely matched and not necessarily hospital-related. 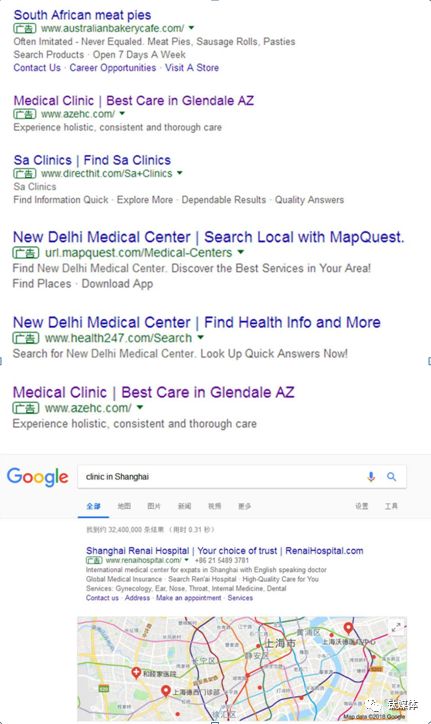 In addition to the hospital as the key word of the auction ads, other pan-medical institutions are also very rich ads, especially the moon sub-center ads are very large. Take the moon-sin center's ads, for example, which appear mainly in Taiwan.

In The Internet environment in Taiwan, China, Google search "moon sub-center", the first four mobile first screen are advertising, accounting for full screen; If the requirement that China's interior should not exceed 30%, this is a serious violation of the provisions. 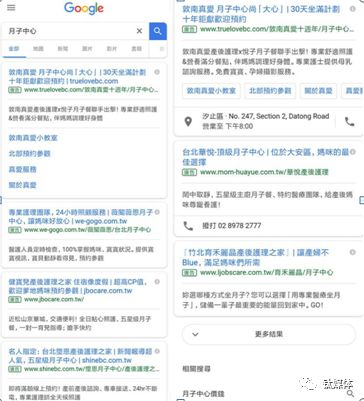 Google for specific disease keywords such as high blood sugar, prostate and so on there are a small amount of advertising content, such as search "high blood sugar" or "prostatitis medicine" when there will be corresponding ads, but overall not much, similar to the previous city hospital ads, Sometimes found out without keywords, is a fuzzy match.

But this is also divided into different diseases, some such as "hemophilia" keywords can be seen under a large number of ads, in the United States network environment through the PC browser search "hemophilia", and in Taiwan search "moon center" similar, there will be 6-7 results, more than half of which directly provide treatment programs. It seems that Google's disease ads do discriminate. 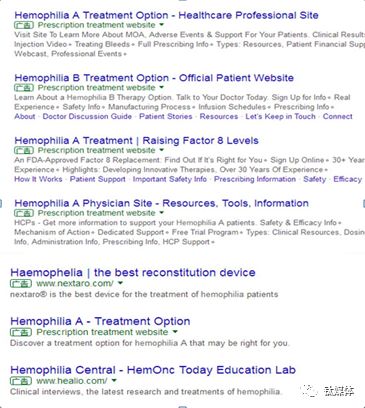 After the advertising of medical institutions and medical conditions, the department advertisement is also an important part of the medical advertisement, which has several men's ads most affect the user experience, how does Google do this?

Advertising for men's sections is more obvious in Europe, such as searching for "Andrology" in the UK, including local men's clinic ads in London, and some ads in Taiwan, China, with "authoritative" and other advertising content endorsement. 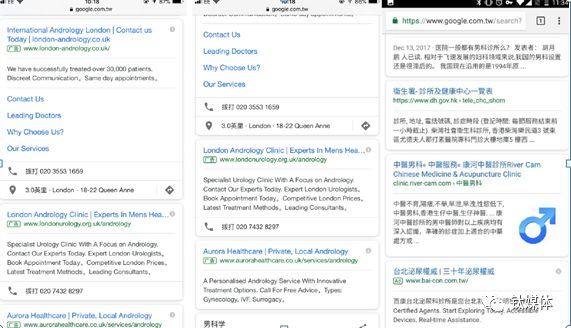 Cosmetic plastic advertising is also an important part of Google's medical advertising, in all regions have basically related advertising business.

Because the regulation of advertising terms abroad is not very strict, the ads here use a lot of extreme terms, such as "latest" "best" and so on. One of the ads above claims to be the best plastic surgery in South Korea, while another sells for "the latest treatment" and "solving any skin problems for customers", which can easily involve false propaganda.

"The latest treatment" may still be true, but "the best plastic surgery in Korea" and "solving any skin problems" have become absolute terms, which may not be against the law in other regions, but the problem does exist, and for users in mainland China, Exaggerating service levels and content is not an accepted advertising technique.

The aforementioned men's section ads use "authoritative" endorsements, and there is also the suspicion of exaggeration. It is not a good omen if the medical profession is allowed to fake or exaggerate propaganda.

Weight loss ads have become a feature of Google.

No ads in mainland China

It's worth mentioning that the weight loss ads in Google Search are very special and worthy of everyone's attention. In the case of high probability, the overall page display of weight loss fitness ads on Google is relatively clean, with text-based, relatively objective presentation.

But compared to hospitals, diseases, departments and plastic ads, Google's weight loss ads are so numerous that even China's search engines don't have to have so many weight-loss ads. 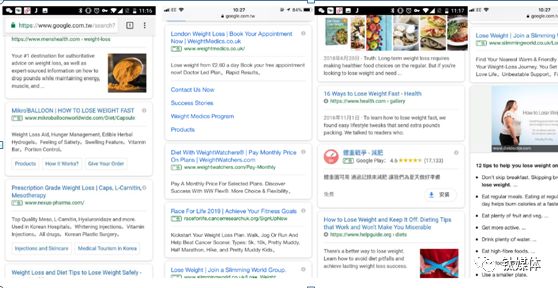 Think of today's headlines in different regions to display different ads, and eventually secretly in the third, fourth and fifth-tier cities to run illegal advertising phenomenon, we can speculate that Google search is also to meet the needs of advertisers and policy riskprevention. In Google's ads, we can see a set of comparisons to support this conclusion: Google's sub-center ads last month were largely aimed at people in Taiwan, China, and there was little in Europe and the United States.

Although user demand is a big factor, but according to different regional policies, needs, public opinion to target medical advertising, and even in some areas of advertising, there is a huge amount of advertising and false propaganda, Google can not help but sigh: this is still the previously trustworthy Google?

So why didn't Google find ads in mainland China?

In fact, Google is not no ads, but in the country can not access, so no enterprises for the domestic market advertising, which is a very uneconomical business for advertisers. This point, from the hospital why only buy English keywords and not buy Chinese keywords can be explained: the target audience of this ad is temporarily in Shanghai international users.

Without advertisers, there will naturally be fewer ads. In turn, google's advertising business in Taiwan, for example, let us know that as long as there is enough user base, Google's medical advertising will naturally appear. The full-screen Moon Center ad tells us that Google's experience can also be a cause for concern when it reveals its true face.

Why does Google also have medical ads?

Normally, many people have always thought that Google is unlikely to have medical ads. But based on the above search results we found that Google does exist a lot of medical ads, and even a lot of advertising words are more obvious. Why is this happening? There may be several reasons.

First, Google didn't take the initiative to take medical advertising in the first place. In 2009, Google's David Whitaker case brought the company into a huge social attack for helping illegal medical advertising. Since then, Google has stopped accepting drug and online pharmacy advertising that is not certified by the FDA and the Pharmacy Board (NABP), but the medical advertising market remains attractive, including advertisers who are keen to exaggerate.

In this way, it can be said that Google was also forced to lose some benefits under some medical ads, not take the initiative. It would be easy to understand if Google had slightly liberalized medical advertising in a less regulated territory, which would be both profitable and free from regulation and blame.

Google expects 100 million Americans to conduct 4.6 billion health-related keyword searches in 2010, according to Sina Technology, and a Pew survey that year found that 60 percent of U.S. adults searched for health information online, with 60 percent of Internet users saying searches would affect their health decisions.

Medical advertising, especially some false ads can bring huge profits to advertisers, coupled with these business activities themselves are very profitable, Google can get a considerable profit.

Although Google has become a technology giant, it will take a lot of investment to develop AI and future technology. In the short term, when these research projects are difficult to generate revenue, the pressure on businesses that can now generate revenue is enormous.

At the same time, the external causes of the environment will also play a role in promoting, Google search in the international scope of operation, different laws and regulations of different countries. For example, in places where laws and regulations are less stringent, it may be easier to involve false advertising, or to increase revenue by increasing the level of application of search algorithms.

It is one of the typical manifestations of non-compliance with regulations in areas outside the United States that audit advertisers. For example, the Moon Center is considered a postnatal care institution in Taiwan, China, and requires qualification. Through the local health and welfare department's official website query, we will find that in Hsinchu County, Zhubei City can not query the advertising of the "YuYu Jing" post-natal care home, so the moon center may not be qualified, but also shows that Google in some areas did not assume the audit responsibility of the main platform.

This situation, although understandable, but as a consumer is undoubtedly still very uncomfortable. Google's image was once perfect, but it really casts doubt on the accuracy and authenticity of Google's search results, given that there are many medical ads and even a few ads that exaggerate propaganda. (This article represents the author's point of view only） 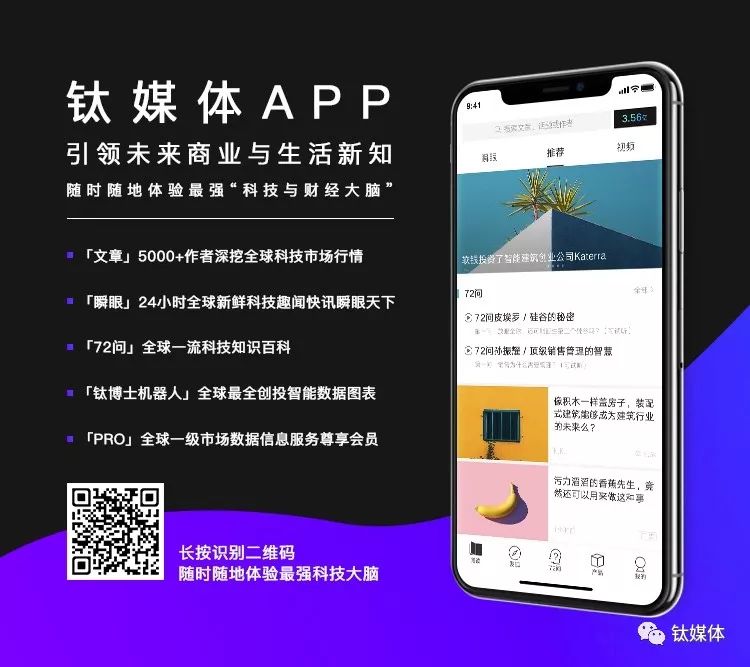 相关Read
更多文章
微信扫一扫
使用小程序
Cancel 允许
Cancel 允许
知道了
确定
SHARE ON TwitterRedditTumblrEmailBufferLinkedInPin It
Google in the GIF world, why rely on six-second ads to account for billions of dollars?
What kind of in-app advertising makes Google have to hit the killer

Information: 11 major changes to Google's advertising in 2019, which ones you don't know yet?
To sell ads more efficiently, Google turns on your microphone and takes privacy off
Google AdSense Auto Ad Setting
Google uses advertising to make money, how do you use Google ads to save money?
More than 1000 keywords that should be excluded from Google ads: a comprehensive list