According to APR 2014, the latest report from Convertro and AOL Platforms on the conversion rate of social media paid and natural advertising in the first quarter of 2014, social media varies widely.

For Twitter, the conversion rate for paid ads is clearly much higher, at 3.9 percent, compared with 1.5 percent for its natural ads.

For Pinterest, it's the opposite of Twitter, where paid ads have a conversion rate of just 0.2 percent and natural ads 1.1 percent.

From the above statistical results can be seen, different social media advertising effect is quite different. In this way, the strategy of social advertising should play a different characteristic.

For example, when it comes to paid advertising, money should be spent primarily on Twitter, not for Interest, while Facebook needs only a small amount of money.

Of course, the direction of the financial budget investment of social advertising is not so simple, but should also give due consideration to the next problem: in the different stages of procurement, the use of different social media content supply and interaction to influence their purchasing decisions. 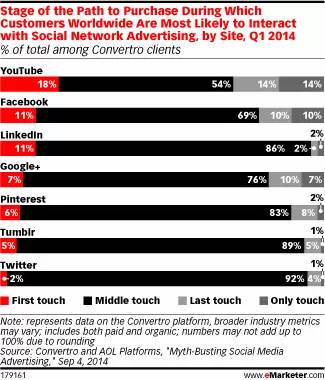 In the intermediate contact phase, users interacted most with ads on Twitter, at 92 per cent, followed by Tumblr and Linkedin at 89 per cent and 86 per cent, respectively.

In fact, in general, the proportion of users interacting with brands on all social media during the intermediate contact stage is relatively high, at least at least more than 54%.