Block ads in front of Youku, YouTube, And Edge videos

Now the experience of domestic online video playback is getting worse and worse, mainly because the advertising time in front of the video is too long. Of courseMost ads are available through the Adblock Plus plug-inShielded out, no settings are required. Like whatTencent video can block ads, yesA small number of ads,For example, Youku and Aichi,He won't let you block it, otherwise there will be the following tips:

Normal ads that do not affect the experience are justified, but 120 seconds of advertising, you are testing the quality of my keyboard?

Timer master has been introduced before, butI don't feel like it's working particularly well,Or nothing.This script is based on the Oil Monkey plug-in,After installing the plug-inTo install the script, this has a public number before pushing.Now he's hinting that he doesn't support Youku,ButMost of the video resources are on Youku,So that's it.The script basically says it's useless.

Today I'm pushing this one for youPlug-ins are perfectly capable of this function. And it never fails. Because Youku only detects whether the ad is playing, this plug-in allows it to play, but it's a little faster and therefore won't be detected in the background.

After the plug-in is installed,He displays a row of buttons in the upper left corner:

This button,I'm not recommended for a point.Because it's easy to miss the ad. First of allClick on the plug-in's settings button to enter the configuration interface. 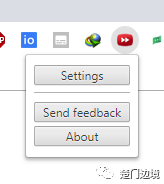 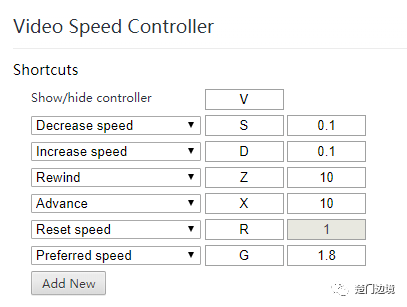 I give a simple translation, V is to show and hide just the button,S and D are slowing down and speeding up,Its magnitude is 0.1,If you press and holdHe will play the current ad very quickly. ZIt's a step backwards.X is fast-forward, step-length is10 seconds.R is reset into speed 1,G plays at the speed it sets at 1.8.

After you've finished the ad,You'll find that playing positives is faster or slower,Reset directly by letter Ryou can watch normally.This is Youku's way of advertising.

Ai Qiyi's Go-AdIt's no use using the same shortcuts. BecauseThe ad for Aichi art is not the same as Youku's.Because its ads are segmented.SuggestionsUsing shortcut D,Hold down the wordsHis playing speed will go up.ButAfter a while it turned into 1 again. Because he'sSeveral advertisements were added together. The method is to hold it down,After removing the advertisement, it was found that the film was faster thanPlay at 5.4 times the speed,Click on the letter R.Just.The recovery is doubled.

This plug-in also has his drawbacks,Only HTML5 video players can be supported.ButMost video vendors are no longer using Flash.So the versatility is very strong.As some netizens say,If he's using Flash to play online videos,you can completely not look, becauseHe's out.

Of course, in Chumen here is not a matter, in the oil monkey to install a HTML5 playback-enabled script on it.

Feel useful, please have a good look before you go.

Don't appreciate, touch the text of the "Dang monk meat" on the line

Don't appreciate, touch the text of the "Dang monk meat" on the line