Out-of-sea dry goods, a literary will be YouTube ads

The following article is from The Notes , The Author's Captain

Set upYouTubeThe first step in an ad is to createYouTube Chanel。 In logging in with your Google accountYouTubeTo create your own channel, the name is best set to your brand. Also bind toGoogle Analyticsfor campaign analysis and repositioning.

YouTubeCampaigns are passed by yourGoogleThe ad account is set up. LoginGoogleADsThen, click the button to create a new campaign and go to the settings page.

YouTubeA variety of options are available to create campaign types that determine the types of ads you can serve, where you can see them, and more. According to your ultimate marketing goals,YouTubeThe video ad selects one of the following options:

After you select a campaign goal, you'll see a list of the campaign types available for that goal, selectVideoAs a campaign type, when you're done, click Continue.

You can useYouTubeThe ad format depends on your campaign goals and the duration of your video ads. The following is an introduction to the three most commonly used formats.

TrueView Video ads allow YouTube Viewers choose whether to watch video ads and when they want to watch them.TrueView Ads (formats) can be divided into two types:

Interstifated ads in YouTube Video sonbefores, during, or after playback, and can also be displayed on video partner sites and apps. This type of ad playback 5 After a second, viewers can choose to skip. This type of ad is intended for people who watch videos. Only watch videos by users30Seconds (or less than full viewing time30seconds of video) before you have to pay for advertising.

TrueViewAnother hidden advantage of advertising is social proof. It means whether or not the user skips the ad,YouTubewill count (and in yourYouTubePublicly displayed on the channel) all video views.

Non-skippable interstitial ads are only available for ads with campaign type "Brand Awareness and Reach" for less than 15 seconds.As with TrueView ads, non-skippable ads run before, in, or after video content.The benefit of this type of ad is that you can make sure that viewers can see your entire footage, which translates into higher ad views metrics. 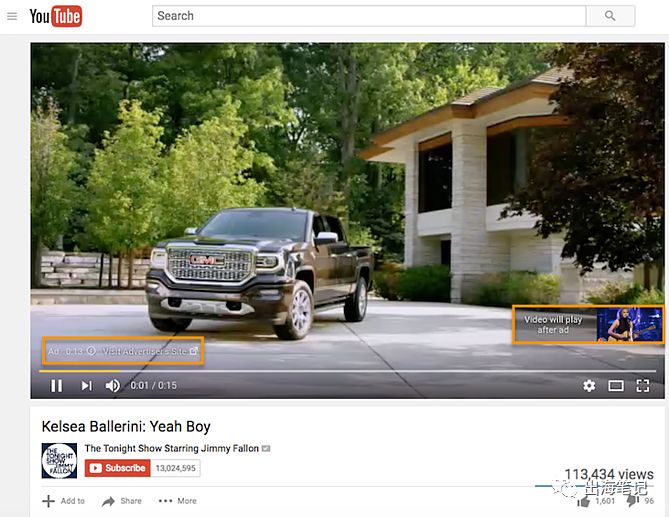 But this type of advertising is expensive because you pay for each viewing. Although this is a more popularYouTubeAd type, but real engagement may not be satisfactory. Because users are forced to watch your ads, their participation is less than choosing to watch5The user who watched the skipable ad after a second is so high.

This type of advertising is billed in such a wayCPM。

This type of ad is essentially a short video, and the length of the video must be6Within seconds, the same is not to skip the video, its advantage spout is cheap, high frequency, the sameCPMpricing, but the disadvantages are equally obvious, that the information you want to express must be condensed in6within seconds. This type of advertisement can work withTrue ViewAds combine to do ad sequences.

Ad sequences enable you to divide your campaign into steps. Once you've set up your sequence, determine which ads to show to your users and in what order. It means that when a user sees the first ad in your order,YouTubeThe next ad will be served first, and then the next one will be served until all the ads appear. As mentioned above will guide advertising andTure ViewAds combine to do ad sequences, you can see ads as a trailer,Ture ViewAds show more detail. But only in30A complete sequence is displayed to the same user over a period of days.

There are two ways to bid:

True ViewAds use maximum per-view cost, and tellYouTubeYou want to pay the maximum price for each viewing of your ad. For discovery ads, it determines the maximum amount you are willing to pay for a click on an ad.

Target per thousand viewing fee, i.e.CPMis the average of what you are willing to pay for every thousand conversions.

There are three options to choose from: network, language, region,

You can see the support in the figure above withYouTubeSearch results,YouTubeVideo andYouTubeThe net alliance, the price of net alliance will be relatively cheap, but the corresponding quality will be uneven.

The next step is to choose the type of ad resource, just as the movie will scale the rating,YouTubeThe video on the same scale rating, advertising resource types have the following three choices, generally speaking, the normal brand is to choose standard advertising resources, the scale is equivalent to the film“PG”, i.e. underage viewers must be accompanied by a parent. 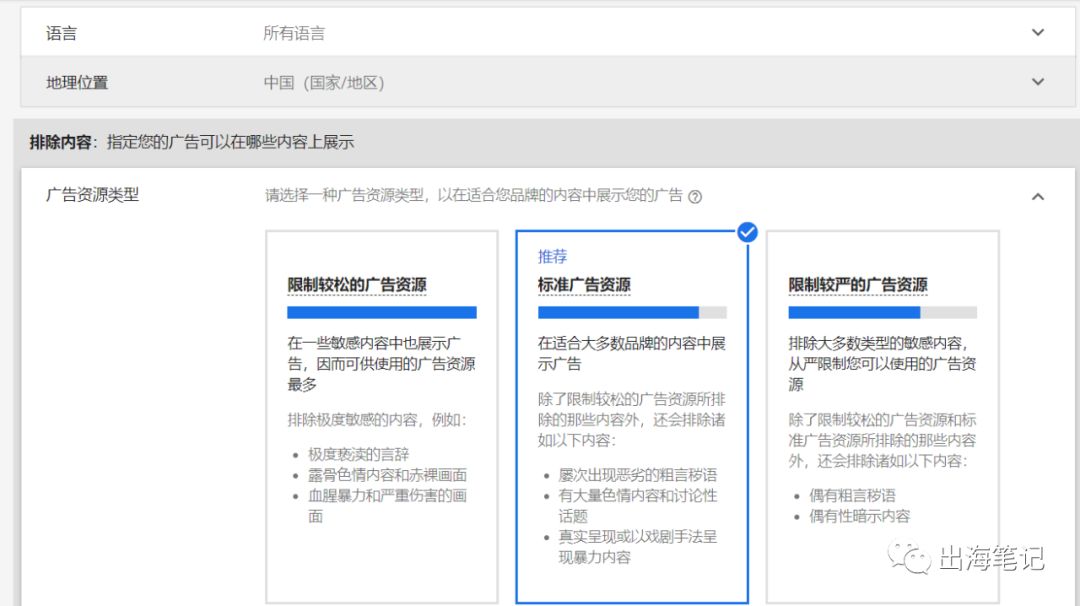 At the same time,YouTubeIt also supports the exclusion of certain types or labels of video, but each time you add an exclusion, your advertising costs may increase, officials also said that this feature will be removed soon, students can not choose if not necessary.

Another hidden option after excluding the type is the selection of the device, frequency, and delivery time, which are the other settings below the figure.

First contactYouTubeAds may be ignored by classmates, but a very important setting is on hand here! That's the frequency set.

The frequency cap is important, which determines whether the ad will drain the user's attention, withFacebookDifferentYouTubeAdvertising leaves this option to advertisers, offering both display frequencies and viewing frequencies in two ways for advertisers to set themselves, both of which can be chosen at the same time. 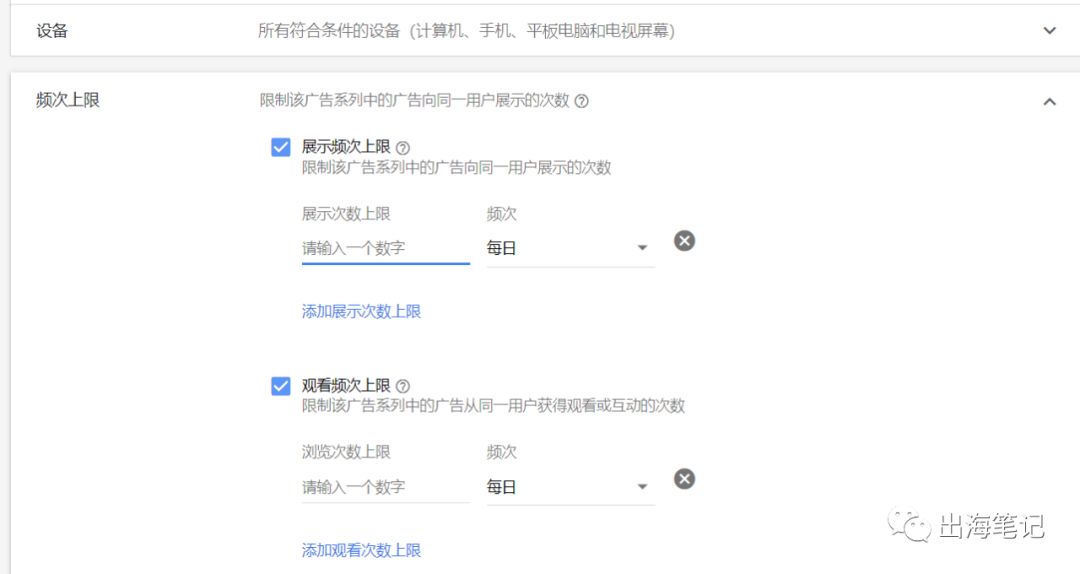 YouTubeThe basic demographic targeting options are simple. You can choose the age, gender, family income and marital status of the target audience (family income options are only available in some areas).

AndFacebookor other platforms,YouTubeWatch videos without logging in, soYouTubeDemographic sits for unregistered users are not known. So when choosing the audience targeting option, be sure to check unknown users.

After the basic positioning is set, there is also a personalized feature selection in the following image.

You can create custom audiences and then create similar audiences. This one feature is related toFacebookOn the same, butYouTubesimilar audiences are more powerful becauseYouTubeData is determined byGoogleThe search data was supplemented.

For example, if youNikeOfficial visitors are included in the Interests category of A Custom Audience, and people who visit the site mayYouTubesee your ad.

One use of custom similar audiences with similar interests is to target site visitors to your competitors. Just put the competitorURLAdd to the custom similarity group, and then let theGoogleAnalyze their habits. You can then show to people who are interested in products similar to yoursYouTubeAdvertising.

Remarketing and similar audience targeting options are similar to those for participating and participating usersFacebookRemarketing. And by theGoogleSeveral categories that are automatically generated are supplemented.

4. Customer list remarketing.Customer List Remarketing allows you to upload a list of contact information that the customer gave you. Then, you can useYouTubeAds to target them (as long as they're signed in to the platform).

Forget all about keywords and topics. This setting is not looking for keywords that people are searching for, but that ads will appear inYouTubeThe keywords that appear in the video.

YouTubeKeywords in the title, tag, and description of the video content are analyzed&The topic, match the keywords you choose, and then insert your ad into the most relevant content.

You can enter your own URL, similar URL, or even a competitor's website address in the Get Keyword Tips boxGoogleKeywords given&Topic tips. 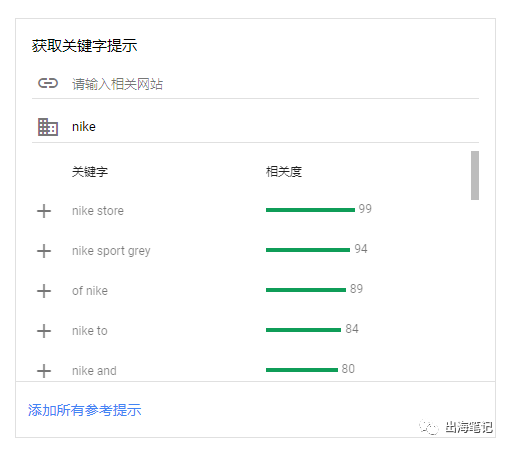 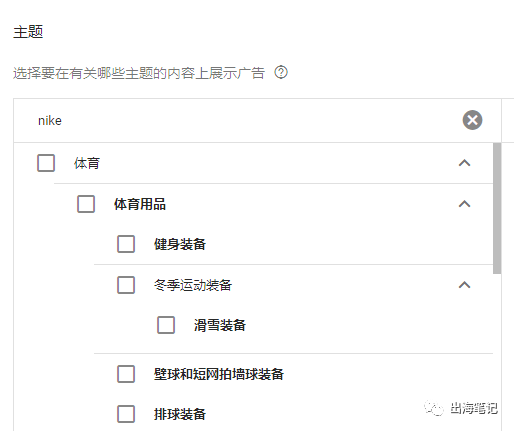 YouTubeThe display location isYouTubeOne of the underutilized gems of advertising allows you to over-target your videos. You can choose the exact channel (or even the exact video) you want to deliver. Imagine you're creating a video ad plugged into a competitor'sYouTubeWhat will happen in a video that is playing on the channel?

If you choose the highest per-view fee as your bid strategy, don't set the bid too low, because your ad may not run at all, and the higher the maximum per-watch ingress, the better the ad will perform.

To make your ad appear higher at the start of your campaign, set the maximum per-view charge to average3-5Times.

For example, if the averageCPVFor$ 0.02-0.32, pleaseCPMAt least set to$ 1.50and then adjust when you have the actual data.

Select a target per-view fee bid strategy, the higher the bid, the better the effect. Don't be afraid to set the price to above average becauseGooglewill be optimized over time.

CreateYouTubeThe whole process of advertising is over. 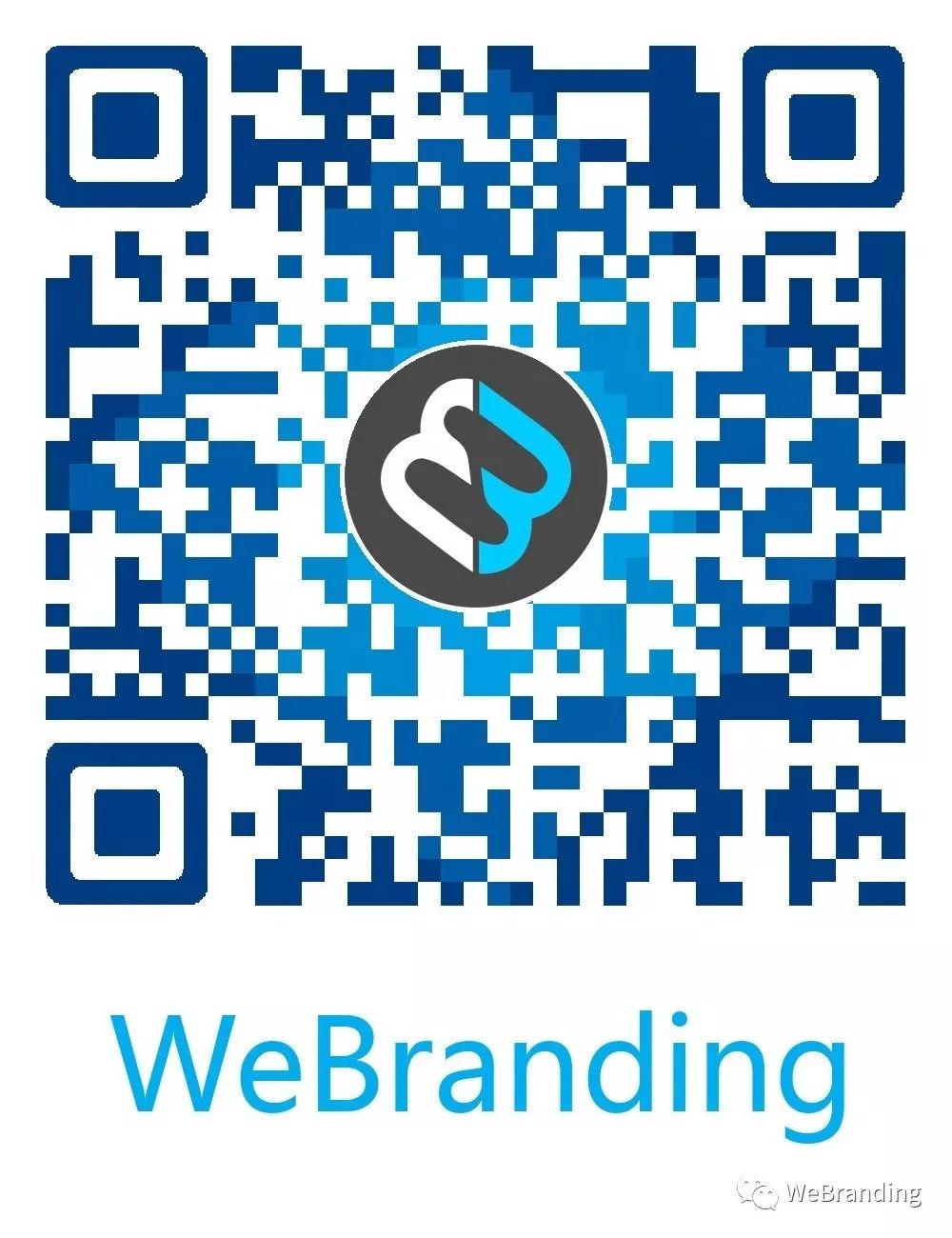 Think-sappy YouTube skips ad
Sound Design: Learn from YouTube's most successful ads of the season! Nice Chord Good Chord
YouTube advertising revenue has grown by 50% a year over the past three year
In 2019, YouTube's top 10 popular ads!
Think of the fear of YouTube can skip the ads why love qiyi, Youku and so on dare not learn?